This will be a… supplementary kind of review. The first reason for that is the fact that this here wraps up the series of items that I got during the LCC. And also, this figure kind of serves as an accessory for two of the recently reviewed Transformers: Masterpiece Soundwave and City Commanderized Ultra Magnus. But not really. Well, it sort of does. Or at least can. Oh, you’ll see what I mean soon!

On with the show, as my favorite artist used to sing. Since this item is a bit unusual, we’ll start with the robot form. Here is Warrior Type F released by company Perfect Effect. 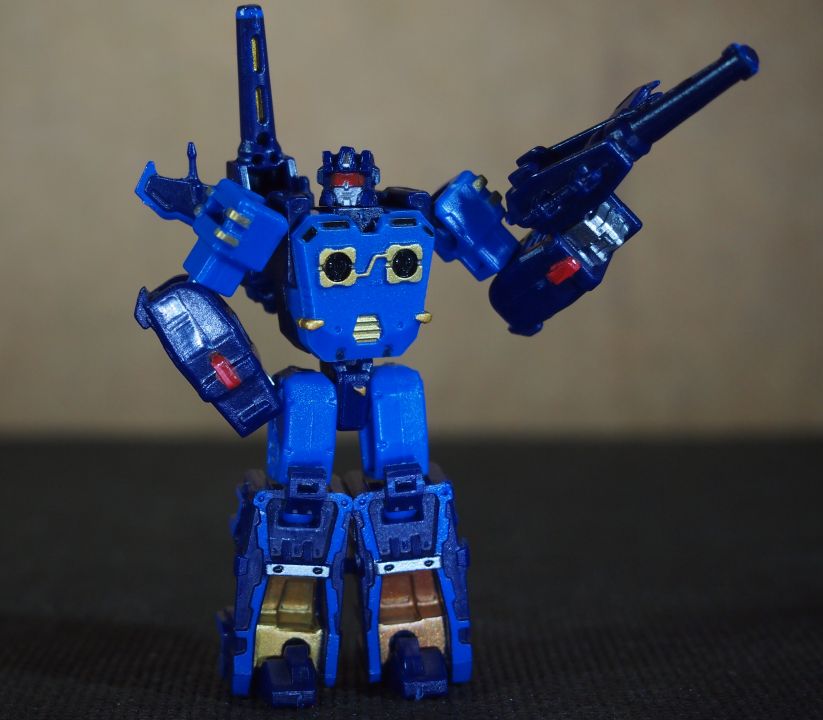 Heyy!, you probably said, this is friggin’ Frenzy! Well, yes. And no. Kind of. Sigh. All right, the thing is he surely is heavily inspired by Frenzy. Check the evidence in form of comparison with the G1 and Masterpiece counterparts. 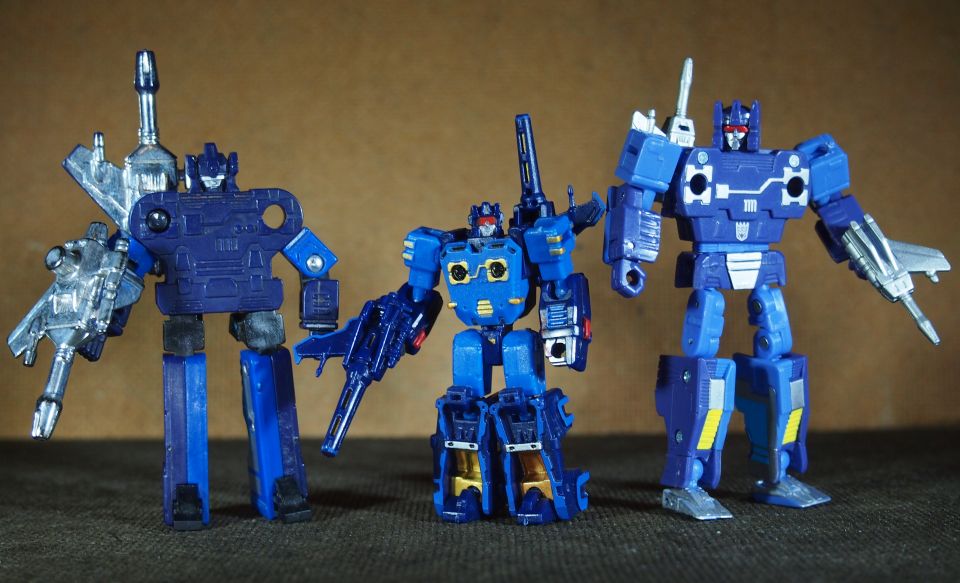 Yup, the silhouette, the colors, the details, the weapons and how they can be attached to his back – everything obviously hints at this being a 3rd Party homage to Frenzy. Sure, he is kinda short, but it shouldn’t disqualify him as yet another representation of the classic character, right? Of course not, as 3rd Party Transformers do come in various sizes. The ‘issue’ here is the alt mode. 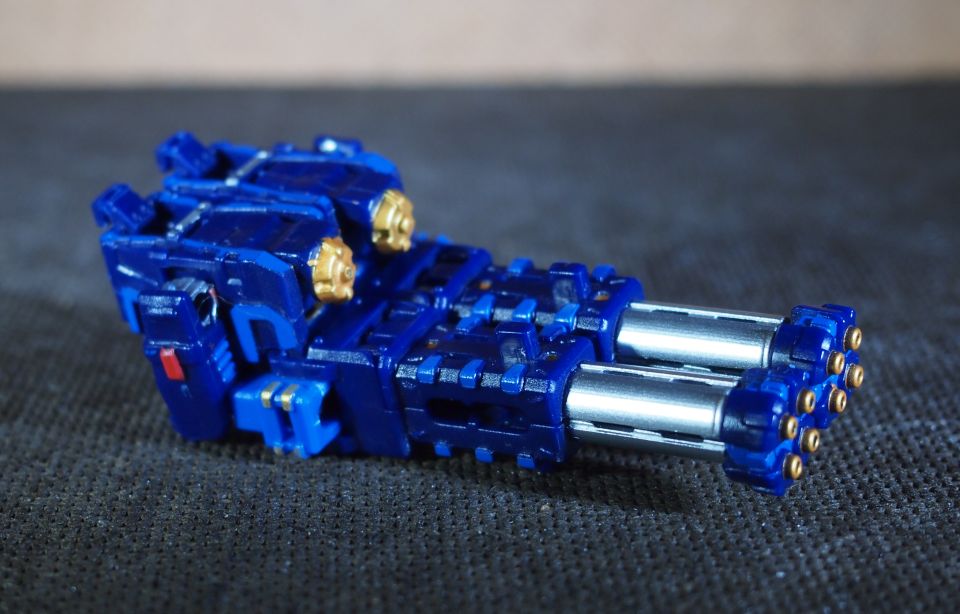 And what the slag is that?? Well, this is Warrior Type F transformed. And in case you have any doubts… 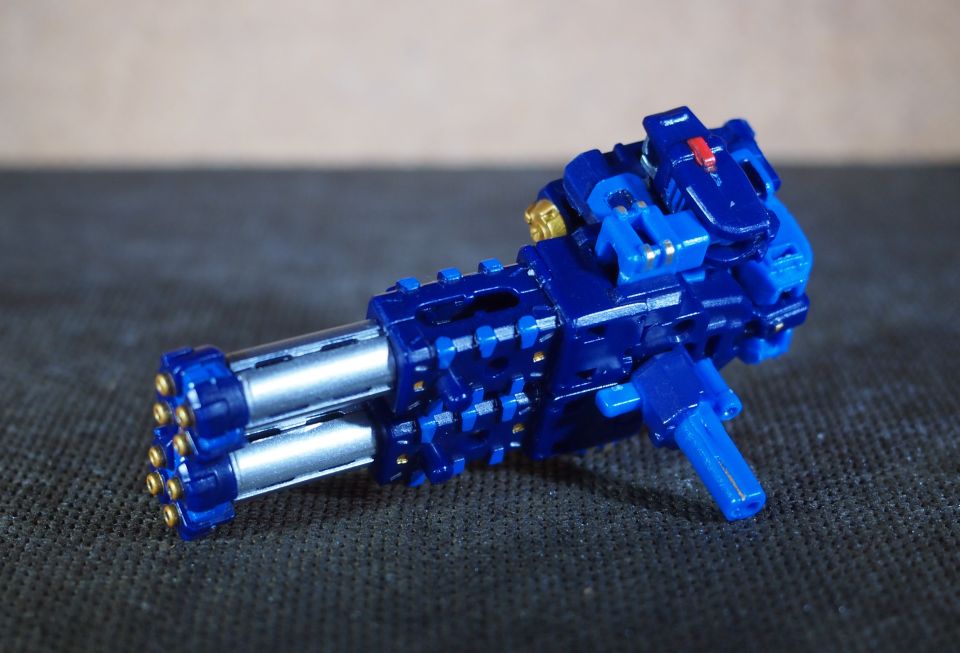 Yes, this is a holding peg and the whole thing serves as a gun. This means that out little guy is actually a Targetmaster companion. The question is whose Targetmaster is he supposed to be. I bet most of you thought of the same Transformer that I did the first time I saw this version of Frenzy. 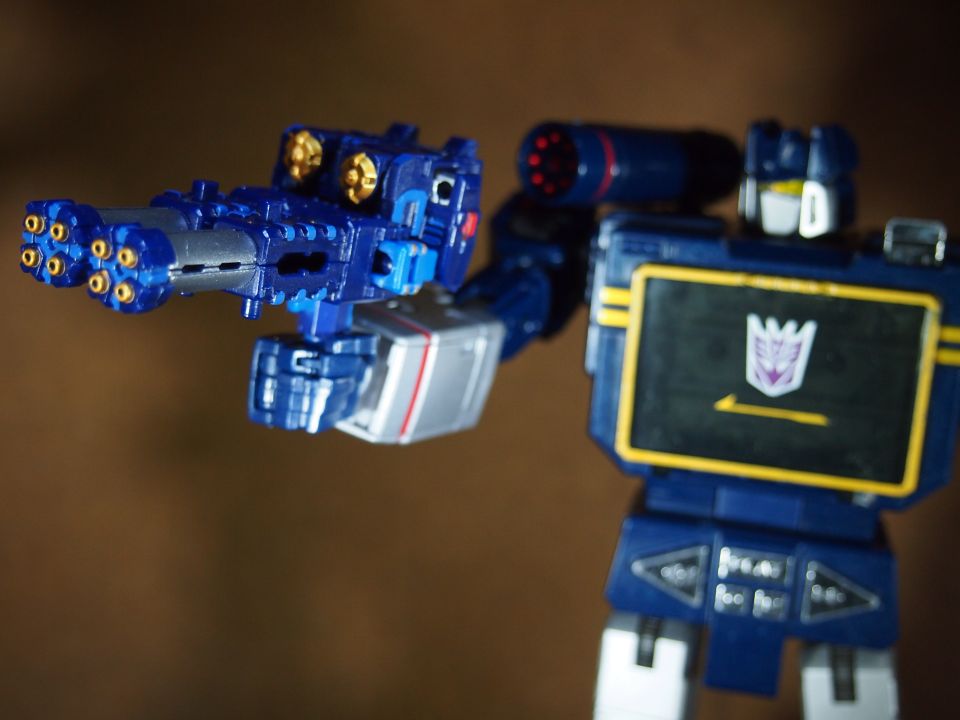 Seems logical enough, doesn’t it? Frenzy should be a cassette but even with a different alt mode, let’s say due to some upgrade or reconstruction, I can see no reason for him to stop being Soundwave‘s partner. To be honest I really like the idea and can even see it work as part of the basic plotline. Many Transformers did have their bodies rebuilt and remodeled in the G1 continuity, for example Bumblebee becoming Goldbug or Grimlock being turned into a Pretender come to mind, so turning an already small and loyal associate into a transforming weapon should be fine too. And yes, I know that all -masters were either humans or Nebulans as this technology involved their biological energy being put to use, but please give this lil’ guy a chance. He seems cool and I want him to work. Just take a look at this image. 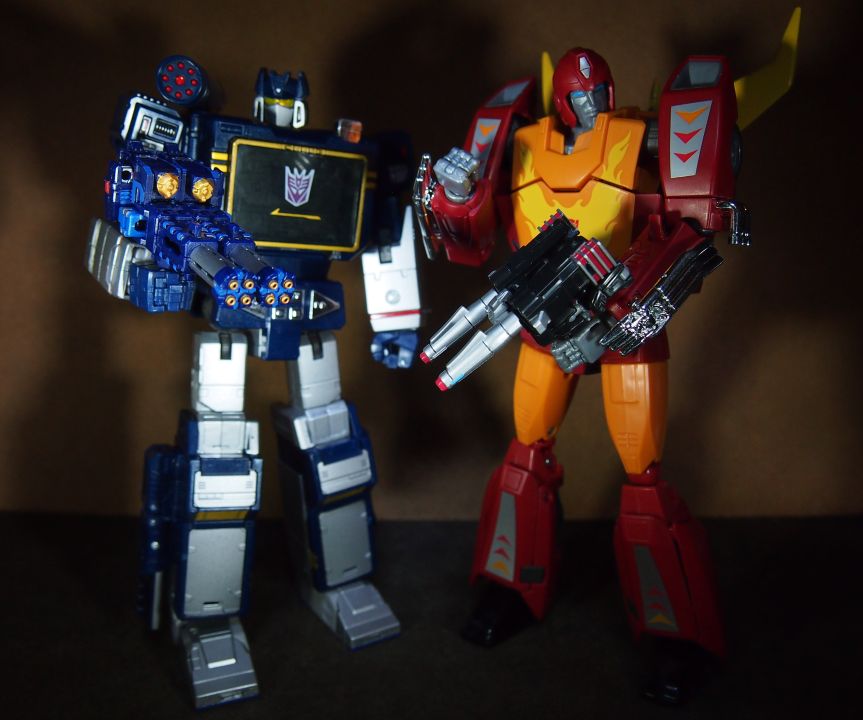 Two Masterpiece Targetmasters! Cool, eh? But you know what? Soundwave is not his intended user. And this is where it becomes a bit weird… This mold was first released in darker color scheme and called Shadow Warrior. And he was supposed to be an accessory for Shadow Commander. Yes, the Shadow Commander, who is a dark-colored version of… 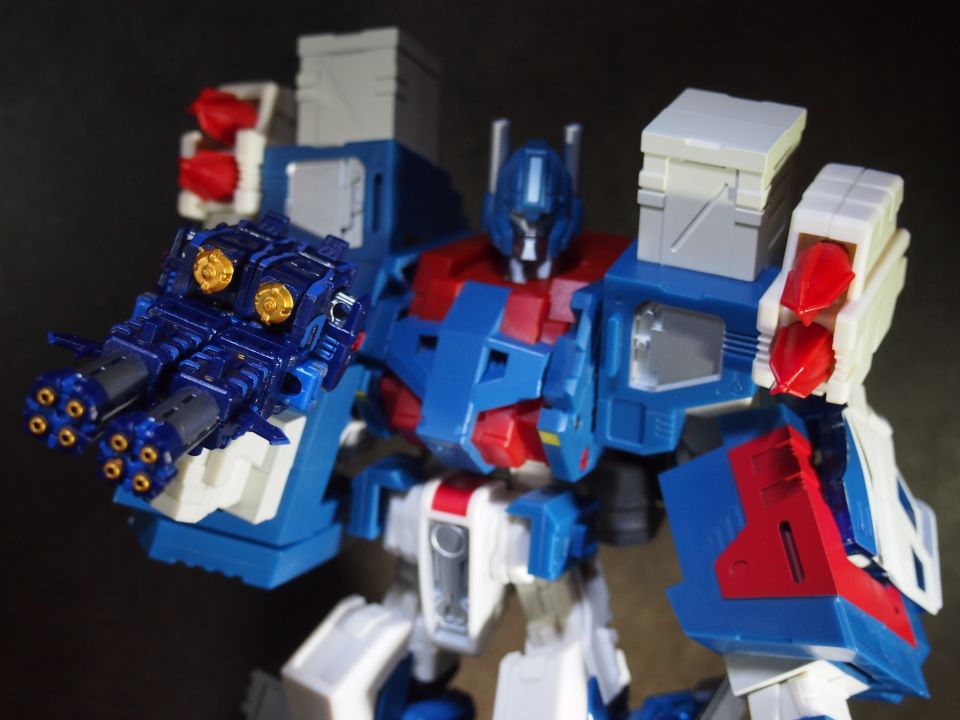 …City Commander – Ultra Magnus in the armor. Can you see the weirdness here? First, City/Shadow Commander is a product of FansProject and the Targetmaster is made by Perfect Effect, so you basically get… a 3rd Party accessory for a 3rd Party upgrade set for a Hasbro figure. And second, regardless of the colors, the lil’ guy is no doubt shaped after the Decepticon cassette robots, so why would they go with Ultra Magnus (or Scourge, as he seems to be the character referenced by Shadow Commander)?? 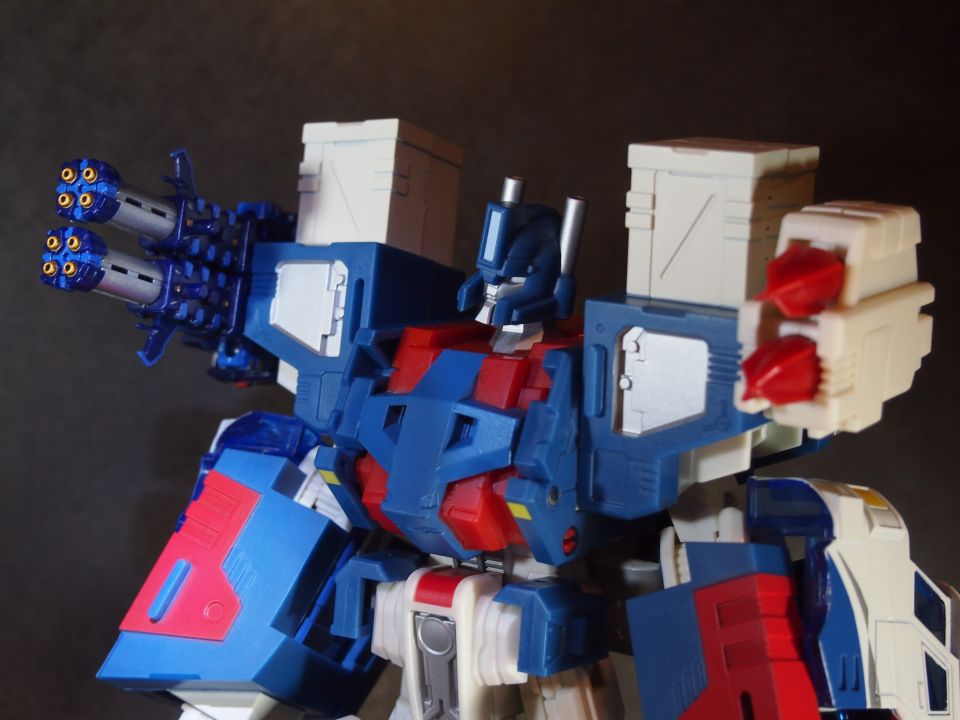 I can’t wrap my head around it but the very instruction sheet that came with Warrior Type F depicts him being attached like that: to City/Shadow Commander’s shoulder (the picture is black and white so I can’t tell which one is shown). Don’t get me wrong, this does look awesome and the colors seem to go together well too. It just rubs me the wrong way in terms of lore. But if you look past that you get yet another cool enhancement for the already great armored Magnus. 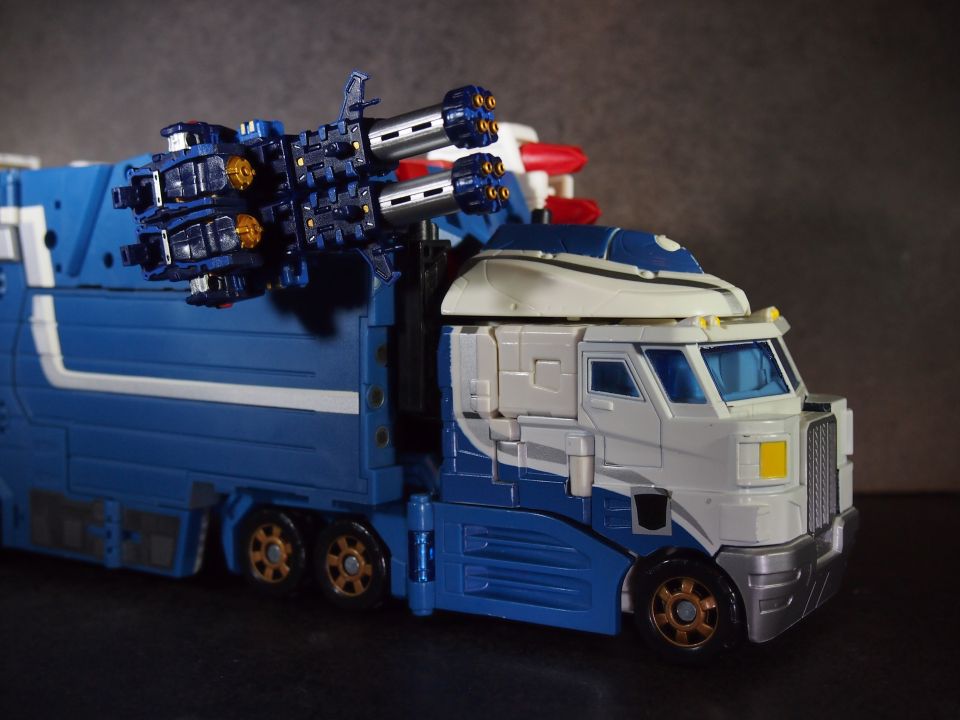 The new weapon can also be attached to the City Commander trailer. And it sure looks nice as well. And speaking of looks… 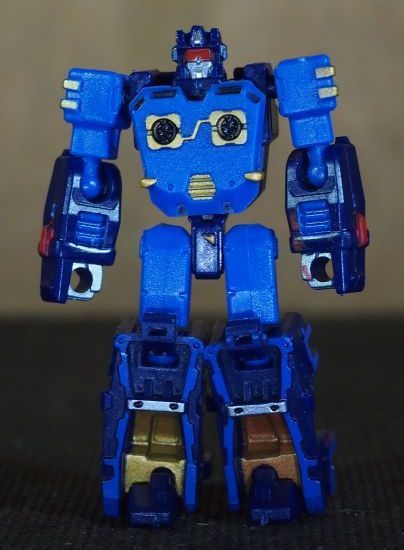 I just can’t help but admire how neat this guy is in robot form. Fully articulated arms and legs allow for dynamic poses and the head on a swivel encourages to make him give a challenging stare to the world. The paint is applied with utmost care to quality bringing out the fantastic details and thus a figure as small as this just oozes personality. Of course he takes most of his design from Frenzy, but he does it so interestingly well, with slight polishing touches here and there, that it gives him this feeling of exclusiveness, as if he were a special version of the character and not, well, an elaborate accessory.

And in terms of accessories, apart from the signature winged guns, Warrior comes with a little extra… 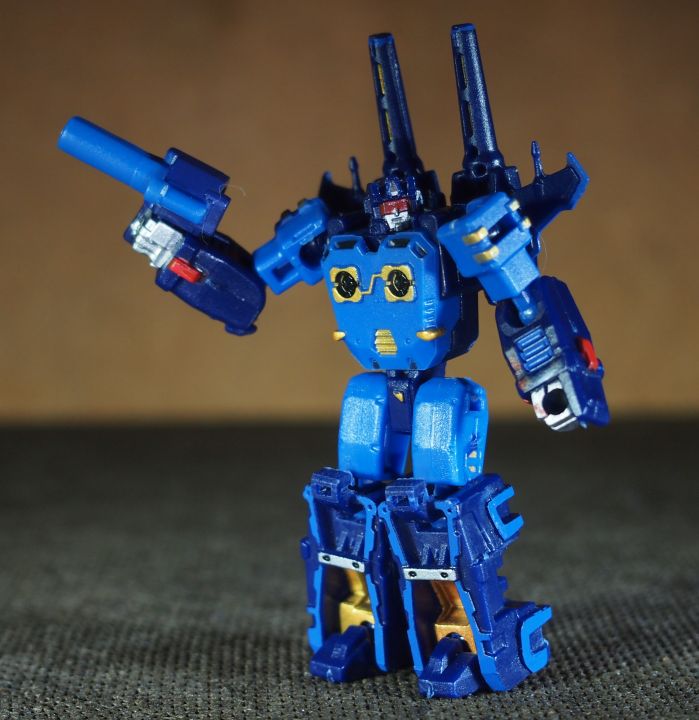 A small pistol which forms the grip for his weapon mode. Not really a game changer in this form but it’s there so I mention it. On the other hand… 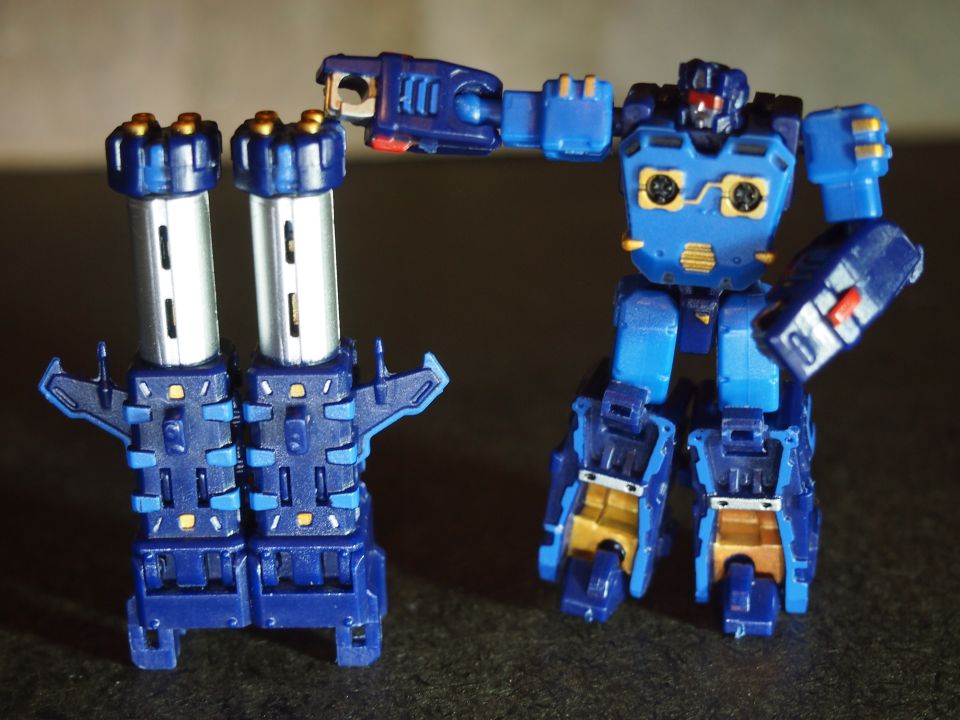 Those bring in a lot! 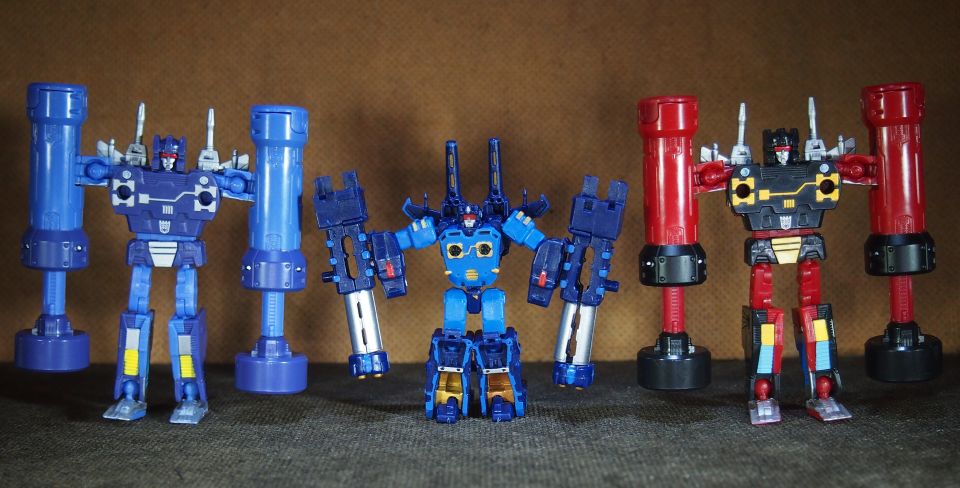 They form the barrels in the weapon mode or the pile drivers, so Warrior Type F can perform all the activities in robot mode as his Masterpiece counterparts. Well, actually, he can do even more. Remember, those pillars are shaped to resemble gun barrels, so… 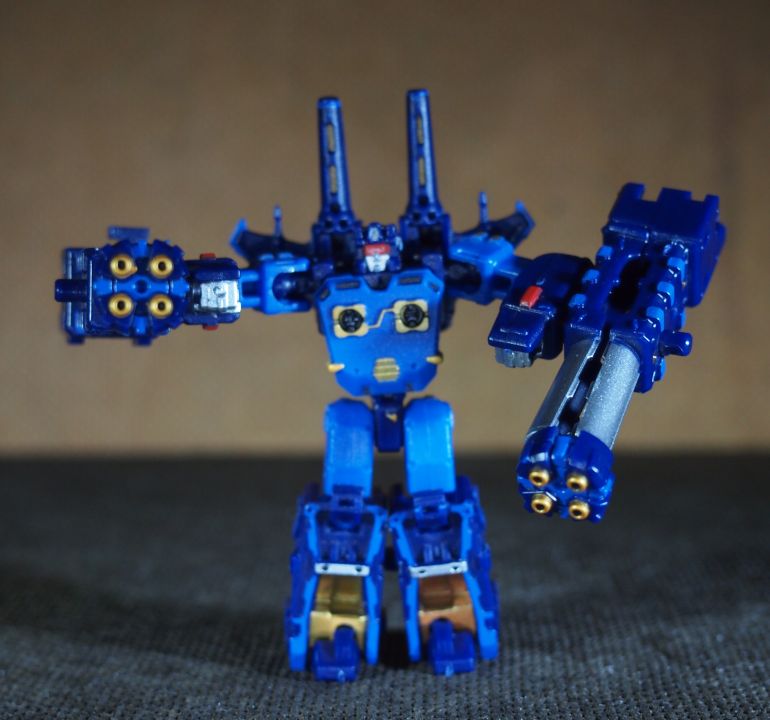 Oh yeah! You can use them as attached gatling guns and make Perfect Effect’s Frenzy rrrumble! Oh and while at it, I immediately thought of one of my recent purchases that also happens to carry around two handy gatlings… 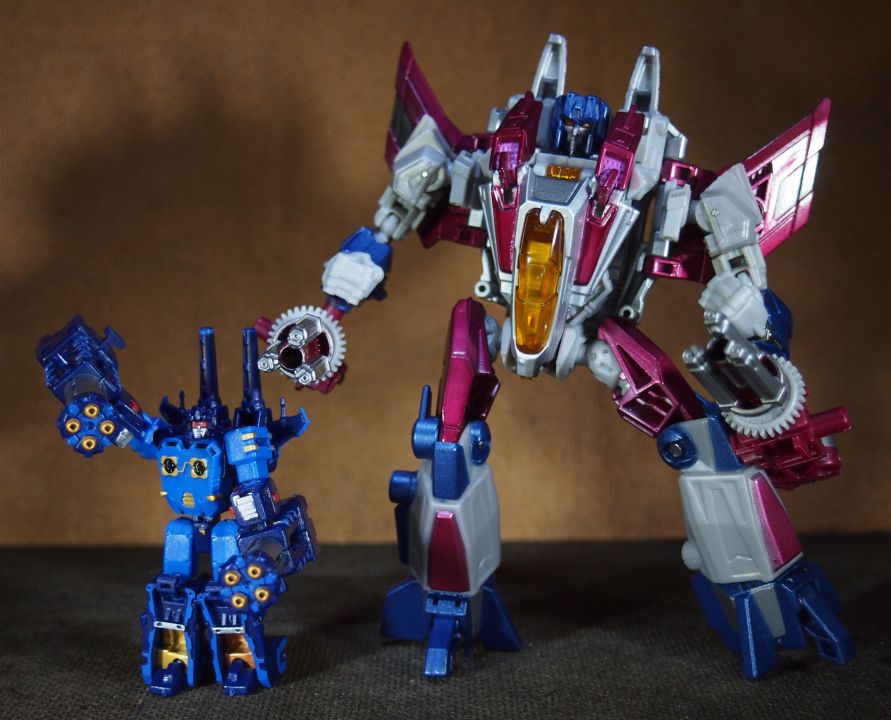 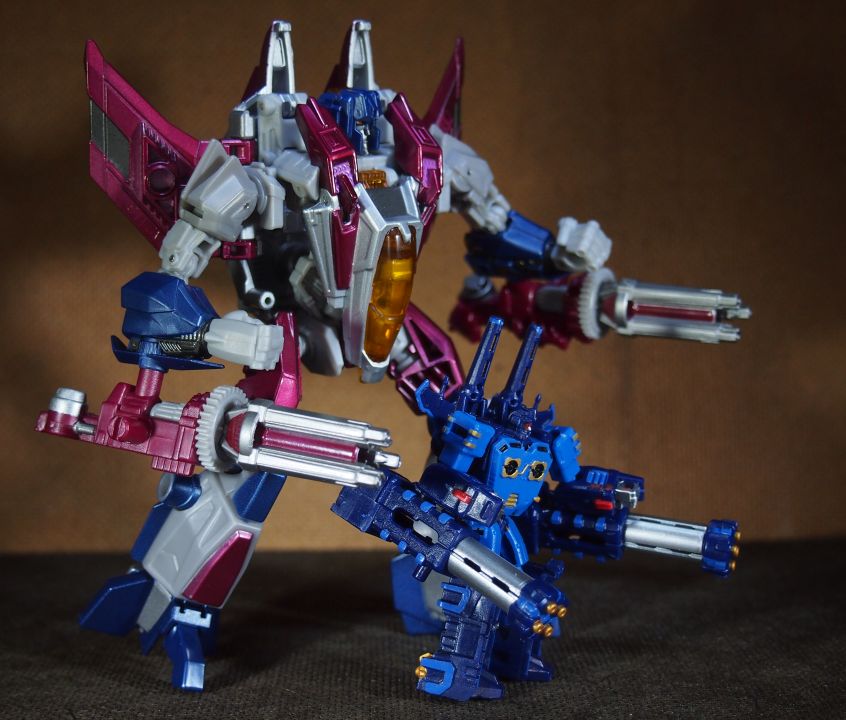 Yup, BAD-ASS! And, to further prove that our Targetmaster is on par with the Masterpiece cassette show-offs… Remember how their guns can be stored inside their pile drivers? 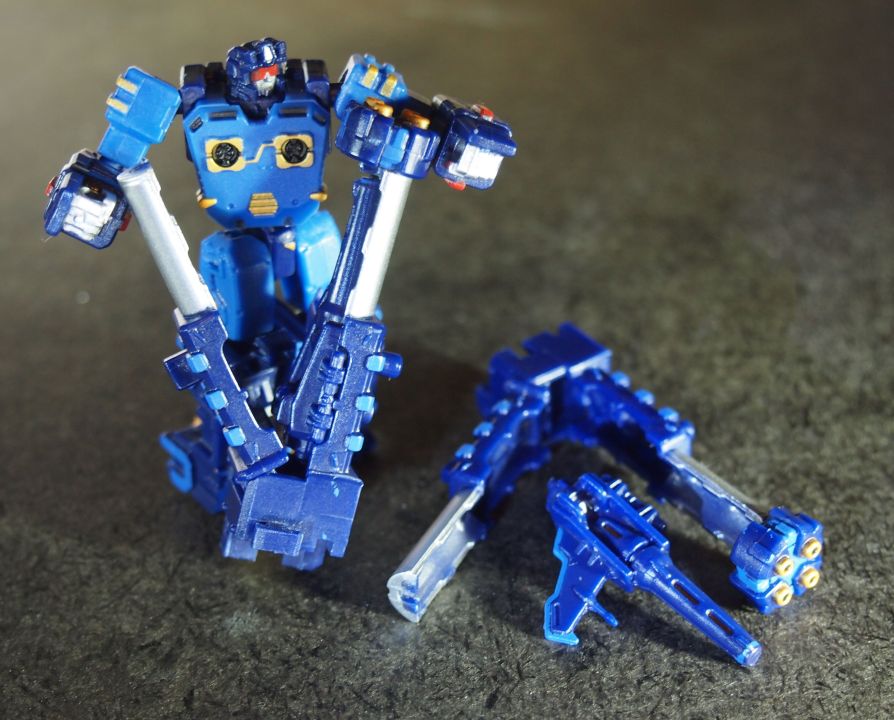 This guy can do that as well! And it serves an additional purpose by adding tiny wings to the weapon mode. Really nice attention to details, I like it.

And this is the general feeling that accompanied me while handling Warrior Type F: he seems so… likable. He is tiny but articulated to a fully satisfying degree. The mixture of vibrant paintjob and high-quality detailing results in a fantastic looking small Transformer. And remember that he is only a Targetmaster after all! 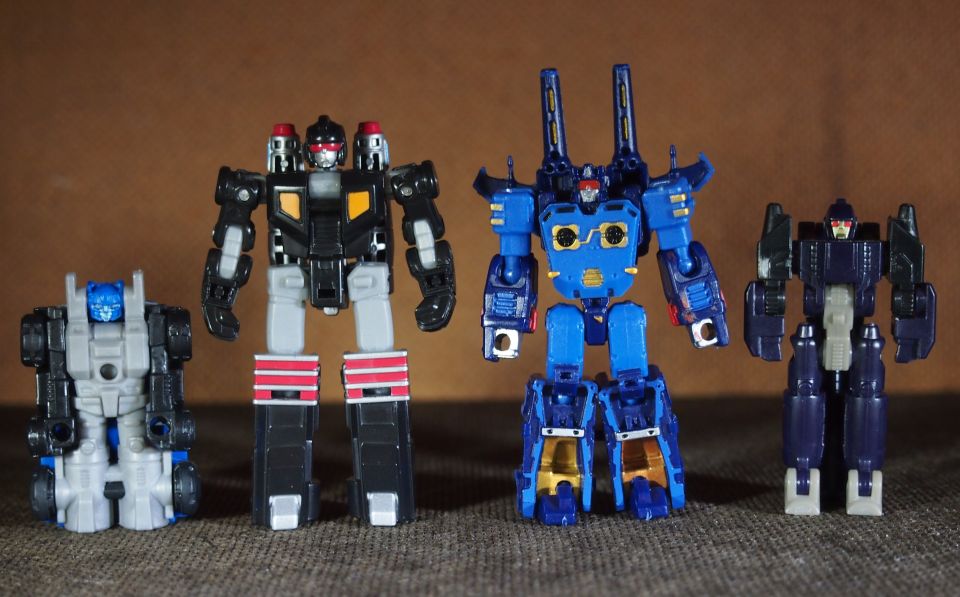 Compared to other Targetmasters he looks more Masterpiece-y than Deluxe-y, so to say. While I fully agree with Nightstick being praised for his design and quality (for a Targetmaster), I’d say Warrior seems much more on Offshoot’s level here. And yes, I added Roller purely for comedic purpose. Call it digging up a skeleton of a dead horse, reviving it using dark magic and then beating to death again. We all need to indulge ourselves sometimes. 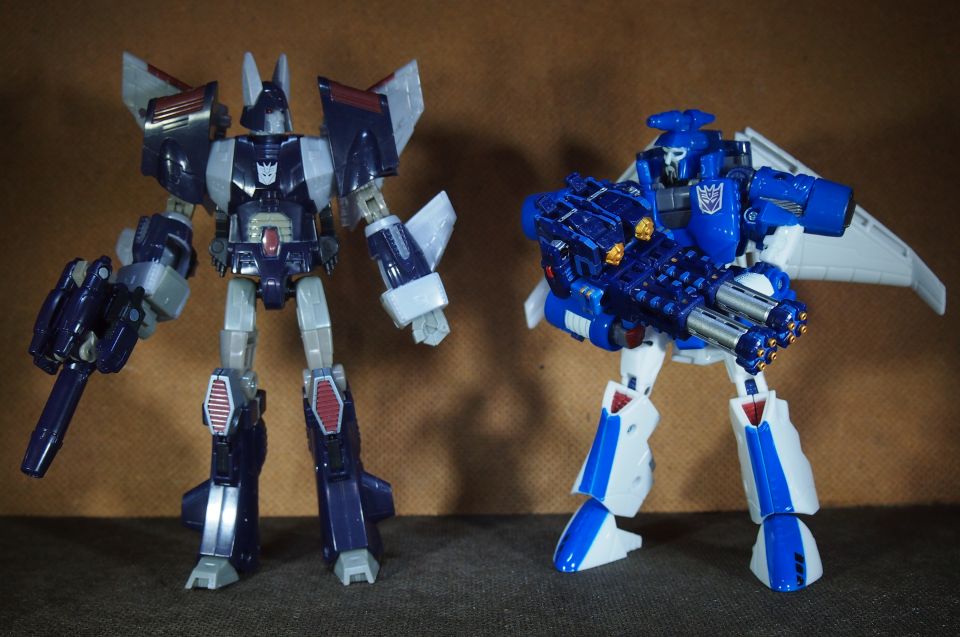 He continues to look amazing in gun mode. He is larger than a regular Targetmaster weapon but can easily be used as a rifle if not a pistol, even by Deluxe class Transformers. 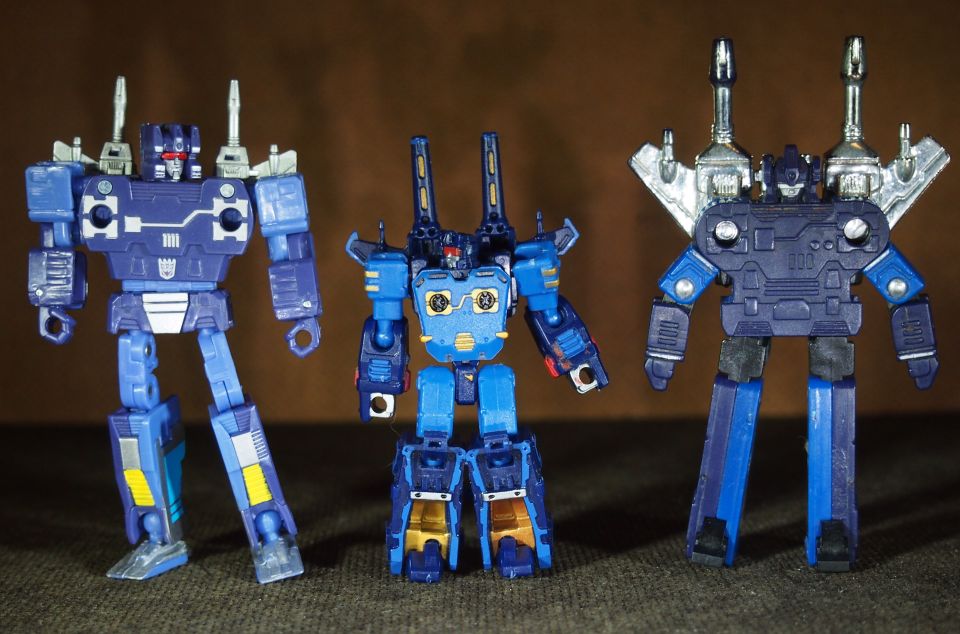 It’s funny how I got him at the LCC planning to use him as an improved version of Frenzy to stand next to my G1 Soundwave on the shelf. And two days later I suddenly managed to find Masterpiece Soundwave in Wales, which both meant saying farewell to the old Soundwave and acquiring two great modern cassette robots. At this point I even slightly regretted buying Warrior Type F. Sure, he transforms into a gun and not a cassette, but I intended to display him in robot mode anyway, so I deemed him as obsolete. And boy, was I wrong! Sure, he is yet another Frenzy, but a really cool one. I have hard time deciding which mold for this character I prefer: Masterpiece or Perfect Effect’s. The first is more accurate in terms of alt mode and size but the latter has this… attitude. He looks fantastic, is highly posable for such a tiny guy, he’s packing two gatling guns and is a friggin’ Targetmaster that can be wielded by many and even used as combat attachment by some. If any of these uses fits your needs then I say: get him! Or one of the other color versions, depending of your expectations and preferences. 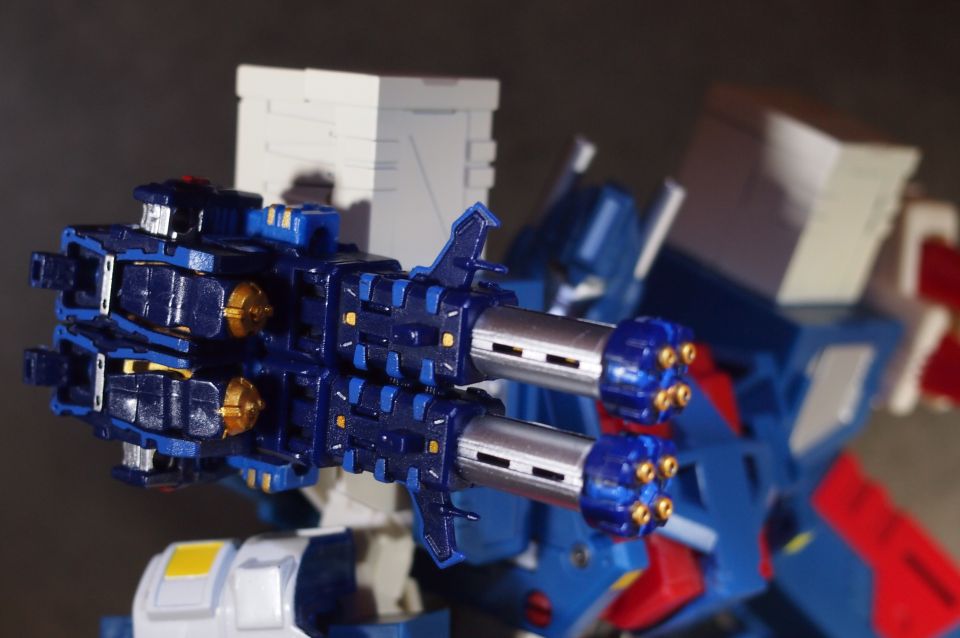 – really small size, a bit too small compared to other cassettes

– in the end he is just an accessory, a really good one but only a Targetmaster

those who fancy a slightly different take on the character, willing to accept smaller size and a completely different alt mode; those liking the idea of using him as a ‘little brother’ for MP or G1 cassette robots (for example for comedic purpose); those wanting a fantastic Targetmaster

those expecting a 1:1 replacement for the cassette robots; those wanting a totally stand-alone Transformer that isn’t an accessory by design 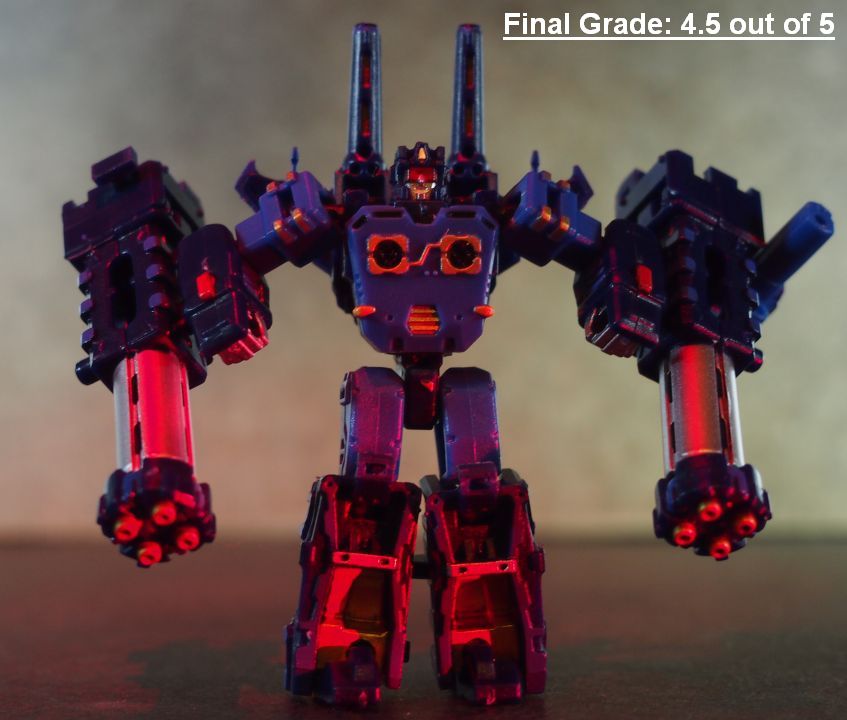