Ah yes, Dragon Ball Z. Worshipped by many, perceived as bafflingly absurd or even irritating by others. I personally am perfectly comfortable riding the crazy trolley of Akira Toriyama’s humor and I loved both the manga and the anime series. So today I decided to sidetrack from the recent theme of reviews depicting LCC findings and chose a previously owned figure. And what a figure it is! Since Dragon Ball Z is so popular, there have been many, MANY related toys released, both licensed and blatant knock-offs. And both have been selling pretty well, especially whenever the franchise got brought to light again (and no, I don’t recall any live-action movie being made, ever, understand?!). Hell, I myself owned few terrible, brutally carved in cheapest plastic figures, because back by that time those were the only ones available around here and I wanted anything for display while enjoying the plot for the first time. But DBZ is all about martial arts and over-the-top combat and incredibly agile and inhumanly trained characters, right? Sure is, so you’d want something really special to give you the ultimate DBZ experience (not sure what that means, but if that bs works for commercials then why not here??). And that level can be achieved by S.H.Figuarts, a line of figures by company Bandai, here in the form of Trunks, or to be exact: Future Trunks.

I would describe S.H.Figuarts as something between Revoltech and Play Arts Kai. So as fan of both those lines – I wholeheartedly approve. I like the Revoltech’s size better, but their stiff and often unwelcoming joints limit the supposed posability. On the other hand, PAK figures are fantastic in terms of articulation, but they are large enough to cause noticeable problems concerning displaying and storage, especially when one gathers more than 2-3 items. Now, SHF offers collectors both compact 1:12 scale and joints quality almost on par with PAK. The downside is you won’t find characters/franchise you like so easily (the choice isn’t as wide and varied as for the two other brands yet) and there is the usually not-so-low price. To give you a more appealing clue concerning the size, here’s a comparison with PAK Catwoman and two Revoltech figures: Rei Ayanami from Neo Genesis Evangelion and Alien from… Alien. 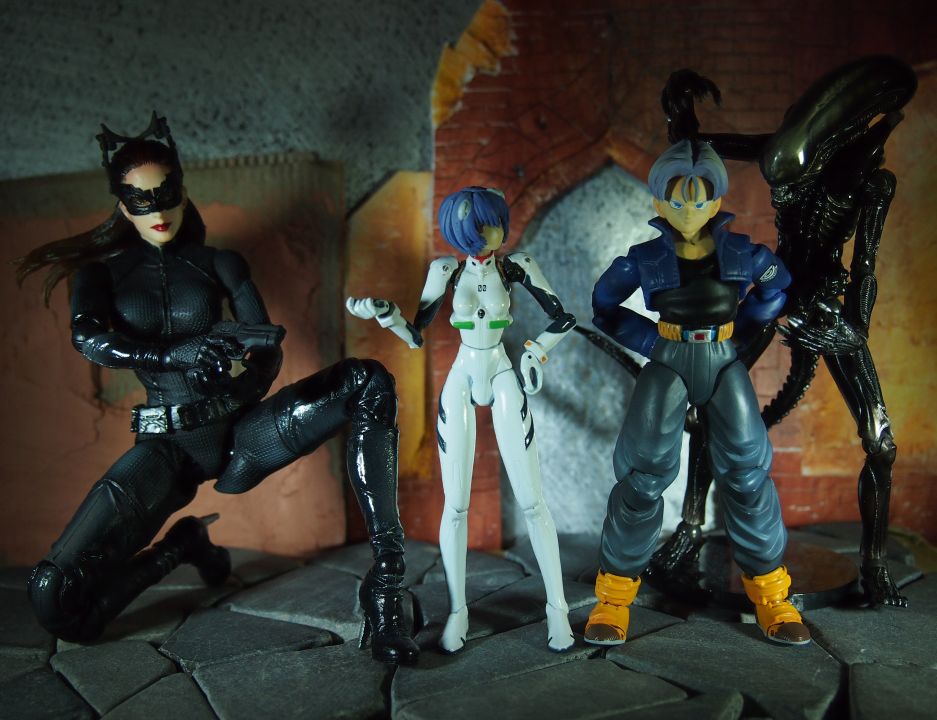 All right, going back to Future Trunks himself. For those of you who are not too familiar with the plot, a short recap about this guy. Trunks is the son of two regular DBZ characters, Vegeta and Bulma, the first being a proud alien warrior prince and the second a human inventor, scientist and heiress to the chairperson’s position of a successful technology-producing company, Capsule Corp. In the regular plot’s timeline Trunks is being born at the beginning of the Z series and near the end of it is an eight-year-old apt and powerful fighter. Now, Future Trunks is a version of him coming from an alternate 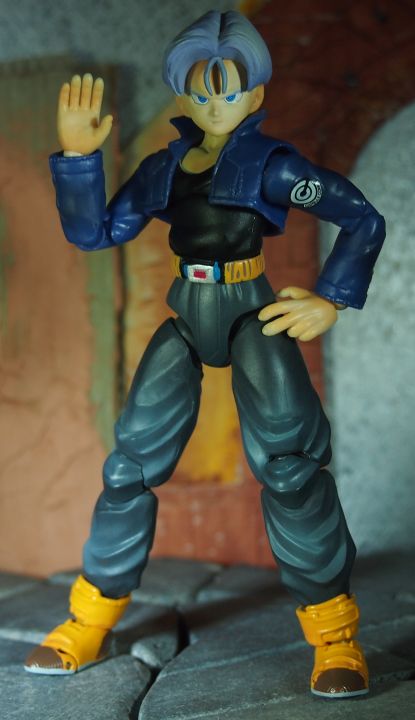 future in a time machine constructed by his mother in order to seek help of present time’s heroes, as in his times there are none left – all slain by vicious cyborgs, including his own father.

Unlike most DBZ characters, Trunks doesn’t sport a typical combat-ready outfit (usually it’s either something martial arts themed or an armor). That’s one of the features that make him unique and so interesting – standing out from the others, yet still perfectly believable as a person inhabiting that specific Toriyama’s world of mixed superb technology and old-fashioned rural simplicity. Trunks wears a pair of dark grey pants that are baggy enough to not limit martial arts performance and fitted enough to pull off a modern look. Orange boots and belt with interesting futuristic details like Velcro straps and a gadgety buckle provide some needed color contrast. The most defining element of Future Trunks’ clothes is the dark blue jacket, again short enough to pass as close-combat-ready and stylish enough to add a pinch of rebellious teenager feel. I must say I really love this James Dean collar, even though it’s the source of noticeable limitation to Trunks’ range of head movement. The finishing touch is provided by a Capsule Corp logo on the sleeve and of course the emo hairdo, proudly worn before the world even heard of emo ‘subculture’. By the way, the hair color is, ironically, a trait inherited from his Earthling mother, while this fierce stare… 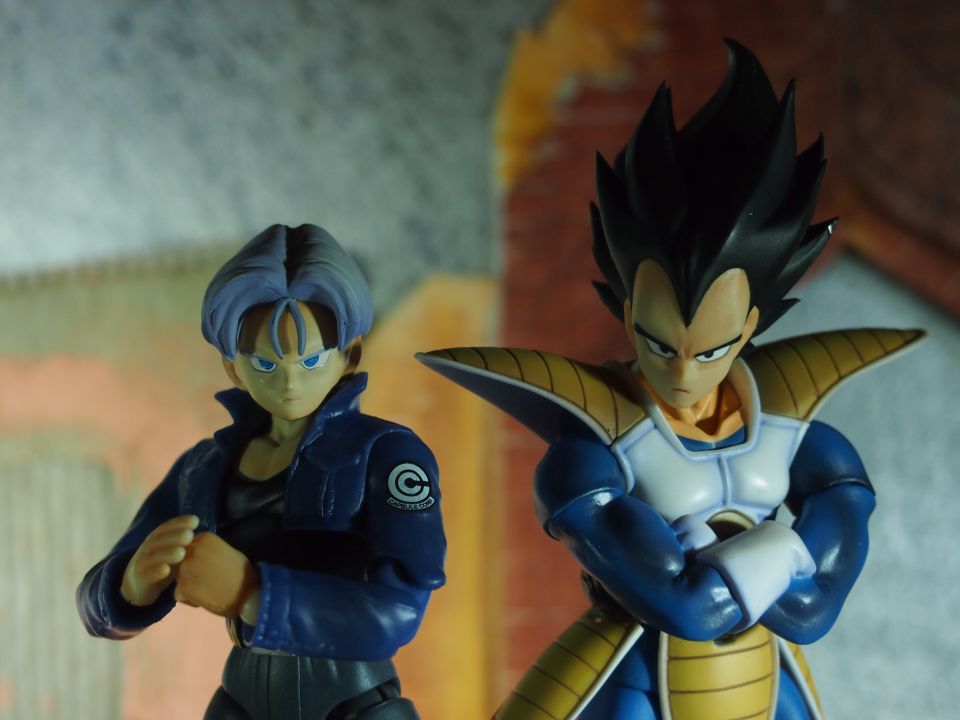 Yeah, the proud and unapproachable Saiyan prince sure has a worthy heir. But hey, that’s just the appearance and not personality… 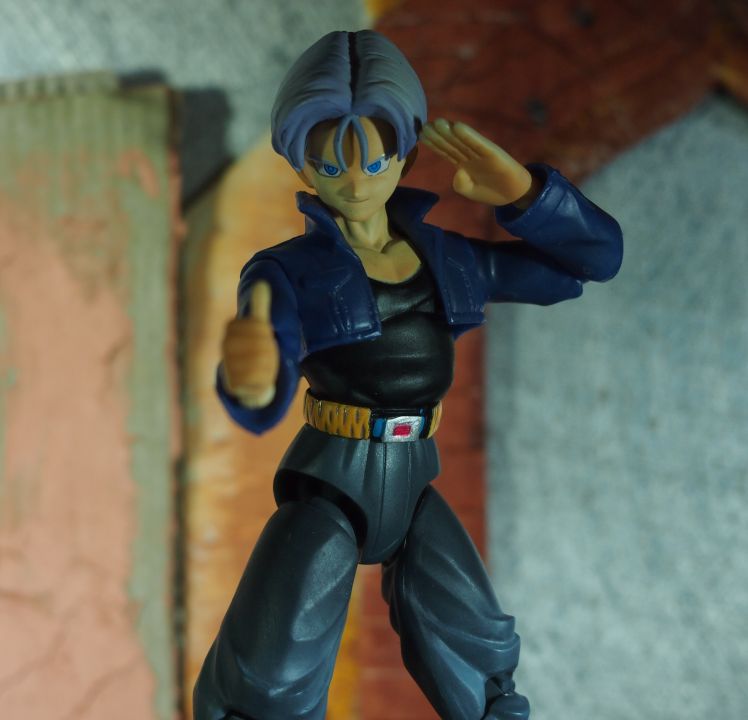 Trunks is a nice, well-mannered young man, he wouldn’t punch you through three near-by hills, Vegeta-style.

He will slice you up with his sword!! And probably chop all the surrounding hills while on it. 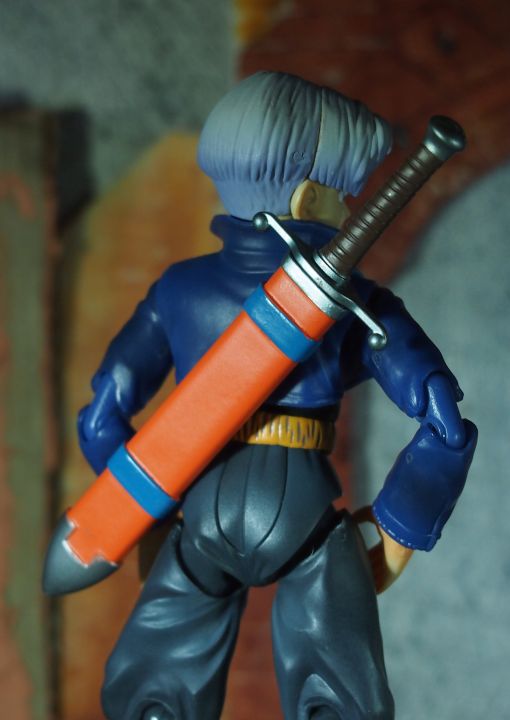 Yes, Future Trunks is the only significant DBZ character that actually uses a weapon (Goku stopped using his extendable bo stick once he grew up and it’s then when the anime changed name from ‘Dragon Ball’ to ‘Dragon Ball Z’). He has this neat medieval-looking sword which of course, according to DBZ logic, he uses martial-arts-style: he begins the attack with just kicks and punches and then with one swift move unsheathes the blade and cuts what needs to be cut, for good! Of course Toriyama could’ve given him a regular katana which is designed to be used this way but where’s the fun in that??

Oh yeah, and since unsheathing moves require a sheath, Trunks has one as well, featuring more vibrant but still fitting colors. He carries it across his back, which doesn’t surprise considering the sword’s size. It is snugly attached to his torso with a long peg which ensures it staying in place even during action poses.

There’s a funny thing concerning the sheath’s design. It looks pretty regular, but when Trunks reaches for his sword… oops! For reasons unclear to me (but I’m no toy designer, mind you) Bandai decided not to go with a regular sword-holding fully hollow sheath, but they molded it as a solid piece with only a shallow place for storage. And, accordingly, they added this stump of a sword to pull off a sheathed weapon look. It could be also used as a dio piece featuring a broken sword, I guess. Let me add I really like how the chest belt’s buckle resembles the waist belt’s one. 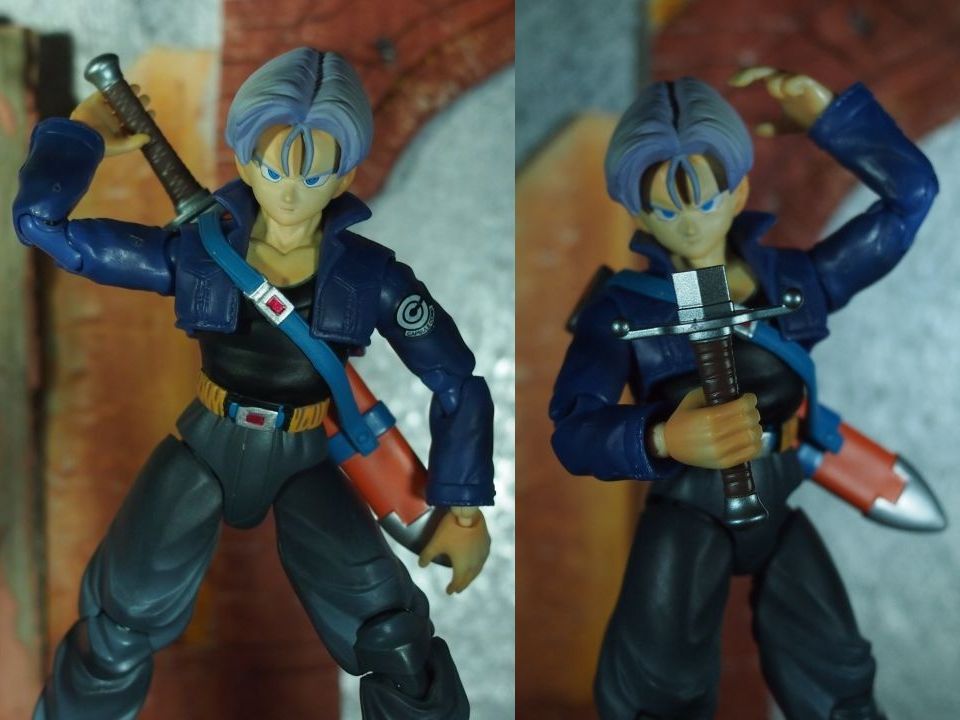 Let’s move on to posability tests, a part where the S.H.Figuarts line really shines. Of course there’s no need for Trunks to put away his sword.

Flexible ball-jointed wrists allow for pointing the blade any direction, even forward, which proves troublesome for many action figures.

Trunks can pull off practically any poses wielding his sword. With it sheathed…

…he’s even more agile! You may have noticed his legs sticking out a bit from sockets at hip joints on some pictures throughout this review, yet here they are fully flush. It’s no design flaw, on the contrary, it’s a very cool feature. His legs can be pulled out of the base placement to some extent and thus, working on additional joints placed deeper inside, allow for greater range of movement. And when you want a more static pose fully presenting Trunks’ show-accurate looks, you just align the joints back in place. The only reason for them not looking ideal on some non-action photos here is my laziness and not taking enough care while posing the figure.

Anyway, time for some action.

First a father-vs-son practice session. And then… testing limits with one grumpy buddy. 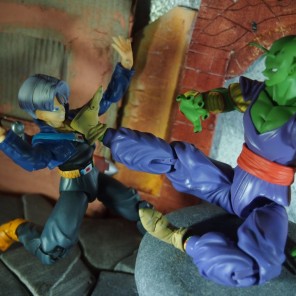 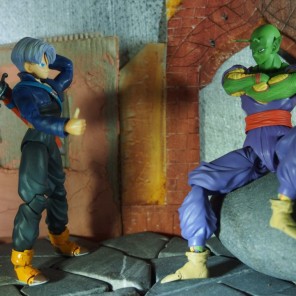 As you can see I have two other SHF DBZ figures, Vegeta and Piccolo. Those are a real treat too, but there is one department in which they are no match for Trunks. I’ll hint you what it is with a… transformation. 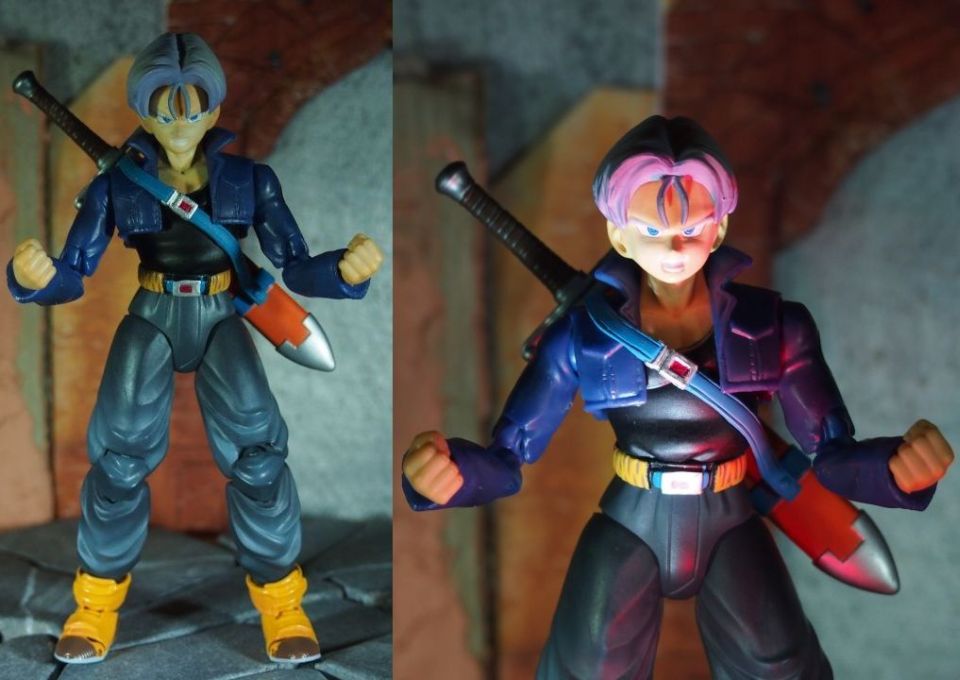 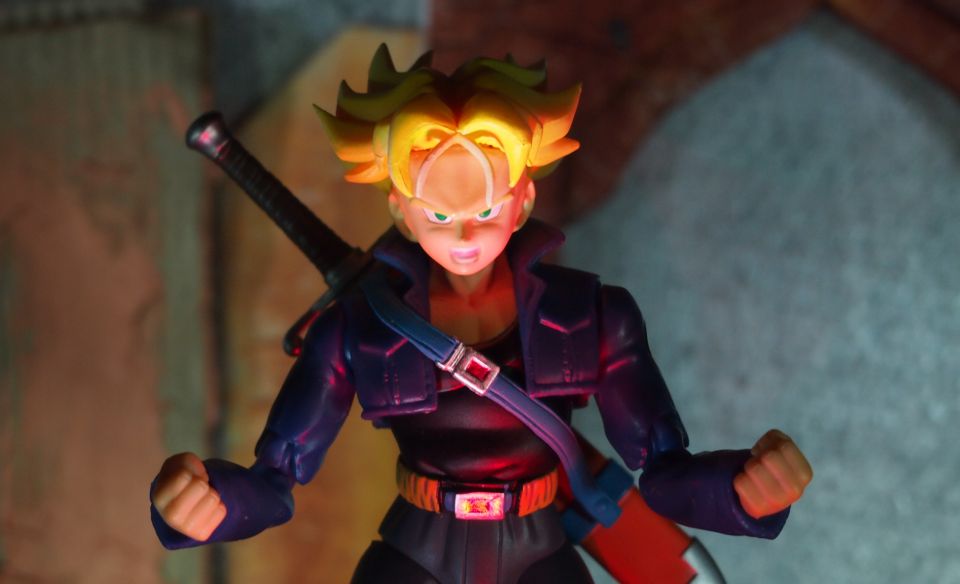 There he is! Trunks in his Super Saiyan form! 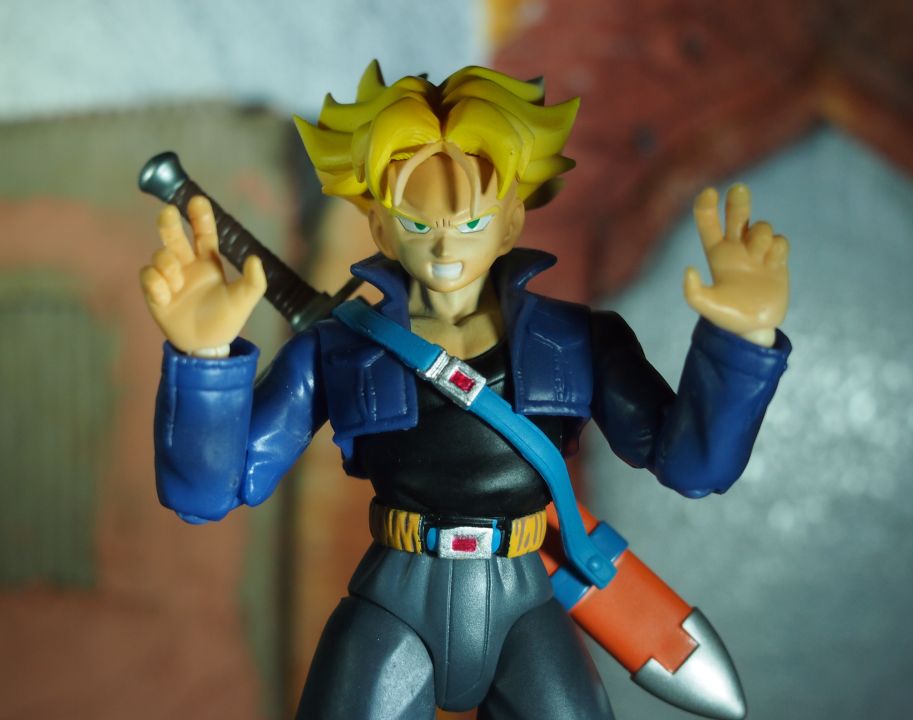 Everybody repeat after Trunks: “Supah Saiyan-jin”.

Ok, you see where I’m going with this? To the accessories department. You probably noticed how the fingers arrangement and face expression are changing from picture to picture. This is achieved by interchangeable sets of palms and faces, which is a regular thing for SHF figures, but where Trunks gains advantage is the Super Saiyan form. It involves not only a new hairdo, but also brand new faces with blond eyebrows and green eyes. Take a look at his whole set: 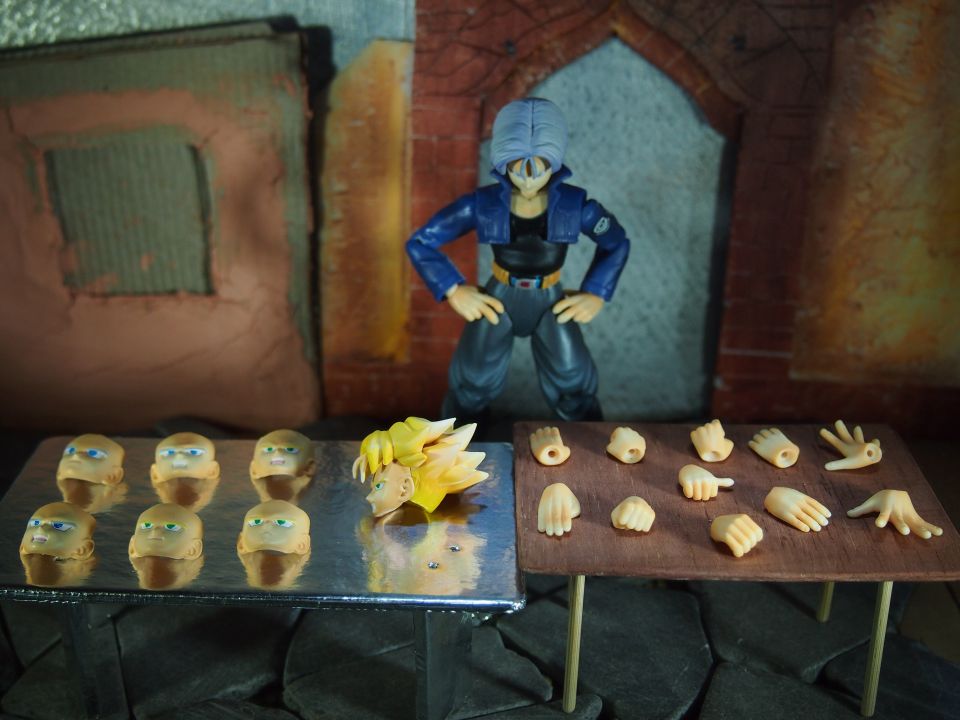 Wow, this guy can emote! The choice of palms is impressive, even for an SHF figure, I can tell you the other two I got don’t go that far. The faces have the same four expressions (meh, smile, baring teeth, shouting) for both regular and SS version and there is also the second head. It’s great that Trunks has all that, especially in light of the fact that all other Saiyans come in one chosen form only – so you have to choose whether to buy a basic or a SS Vegeta, Goku, Gohan etc. And when you buy one Future Trunks you get it all at once. Neat! Remember he also has his sword (and this stumpy version too) with a nice wearable sheath. The only thing I find lacking here is a stand. And I don’t mean a piece of plastic with pegs to support the figure because he’s perfectly stable in most poses. I mean one of them fancy stands with an adjustable grip meant for aerial poses that many Japanese figures come with, only not those I get, as it would seem. Sigh. 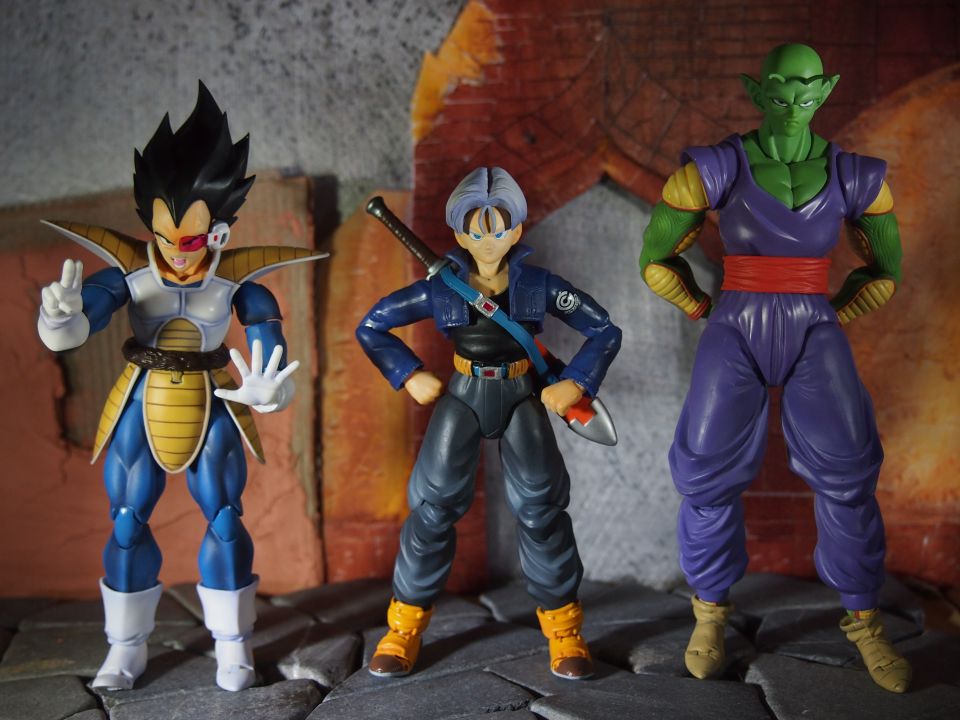 This is my first review of an SHF figure, so I won’t go into details comparing him to other ones I have (I plan on reviewing them in the future), but I can share some general remarks. He luckily lacks some construction flaws that the other guys have AND has a wide selection of accessories, including SS form’s head with four faces and a sword with a sheath. His only direct disadvantage compared to Vegeta and Piccolo here is lack of a folded arms piece (check the father and son stare comparison and end of duel with Piccolo photos for details), so nothing major, really. I bought Trunks first and now, basing solely on my experience with those three figures, I can tell you that (providing you aren’t strongly biased by liking one character more) I would call him the best of them. 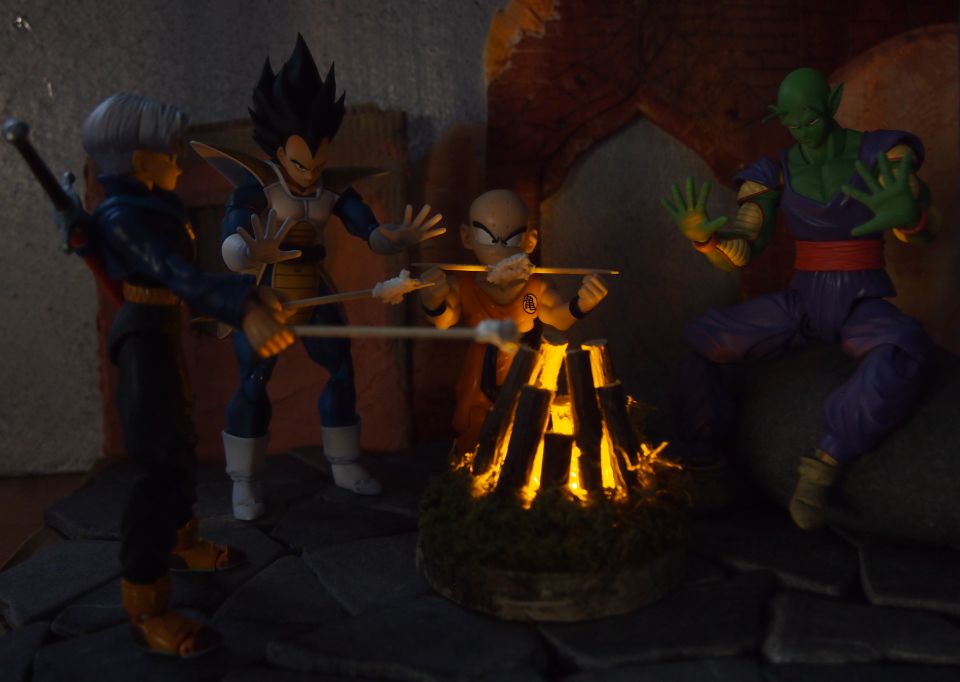 From the moment I opened my first S.H.Figuarts figure I was in love and let me tell you: having more to pose them together just causes even greater craving for next additions to the collection. I of course highly recommend the line and, in particular, Future Trunks to all DBZ fans out there. Let me also add that, while I can totally understand (but not relate) lack of appreciation for manga designs, I can also imagine someone putting such feelings aside for the sake of owning at least one SHF figure – they are just so satisfying in terms of quality, posability and emoting, a real treat for fans of playing with and/or photographing action figures. And since Future Trunks is one of DBZ’s most non-defining characters in terms of outfits, I bet he could work for those liking a more generic SF/fantasy design. 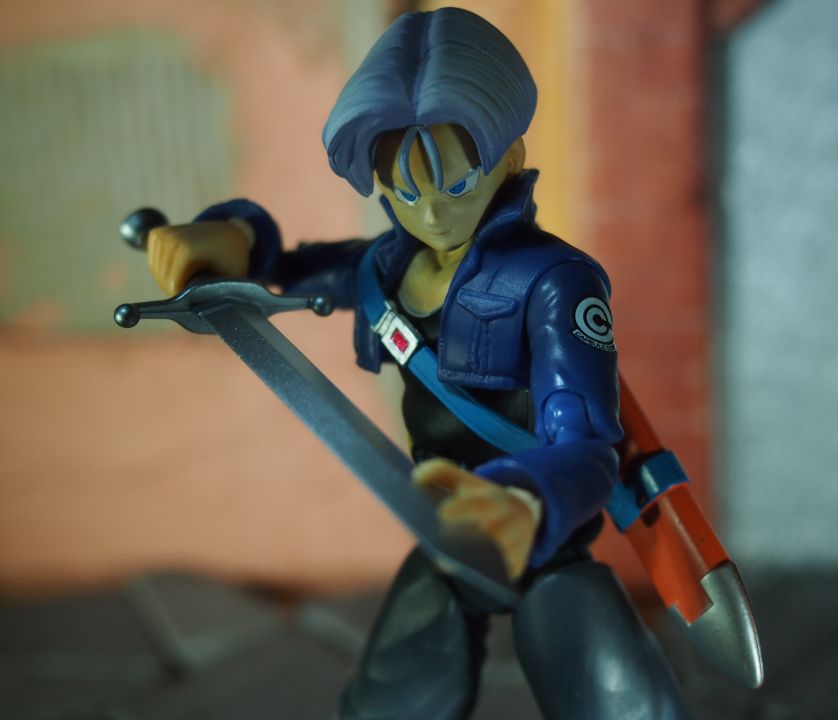 + comes armed with a sword accompanied by a wearable sheath

– exchanging palms frequently may cause them to fit more loosely

umm… those who hate DBZ or manga designs in general? but why would they even consider a figure like that? I dunno, I’m clutching at straws here 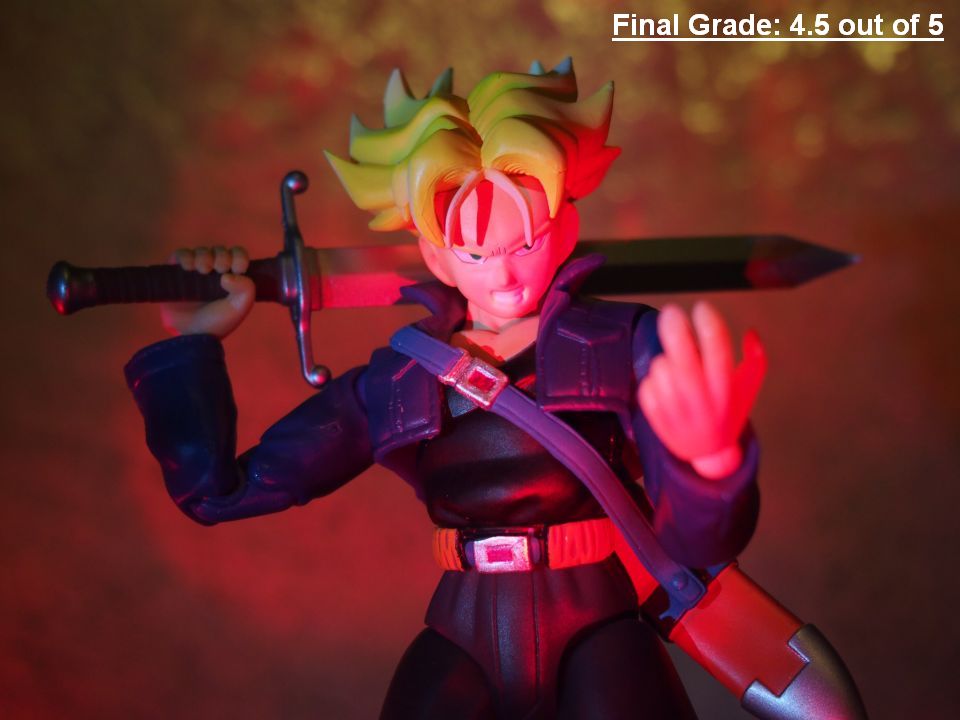