After Future Trunks’ review you probably expected the next S.H.Figuarts figure here to be one of the other Dragon Ball Z characters that I have, didn’t you? Well, to be honest, so did I, but an unexpected lucky purchase brought us all a surprise. This time we are going to take a look at an uncompromising and fearless female warrior, once a queen of an ancient Moon race, now her incarnation reborn in a body of a seemingly ordinary teenage girl, bent on defeating demons threatening to conquer Earth. I present to you the skillful fighter and charismatic leader… 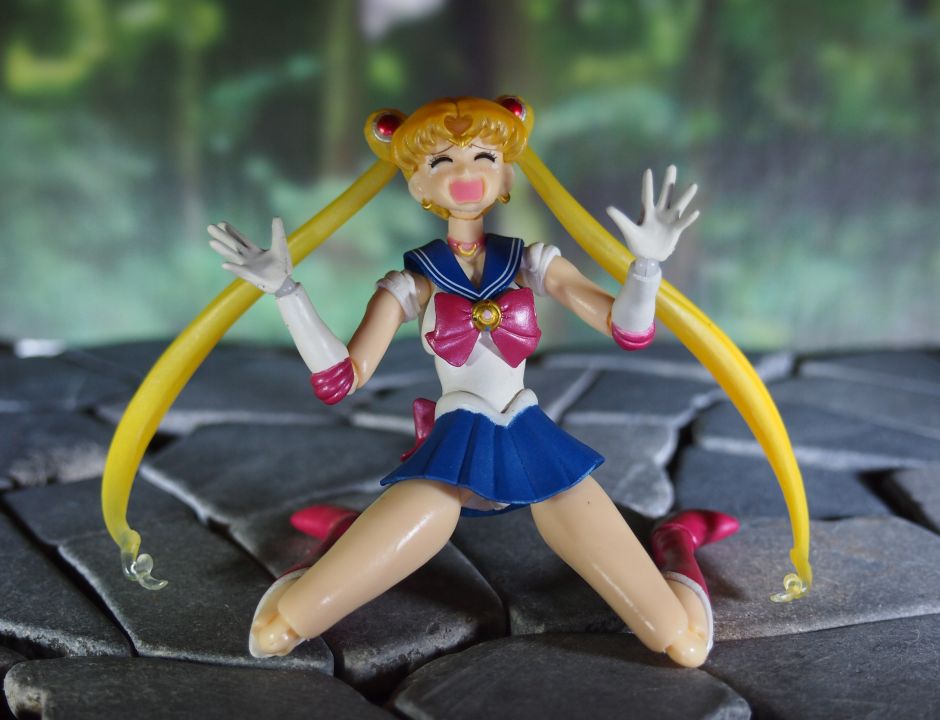 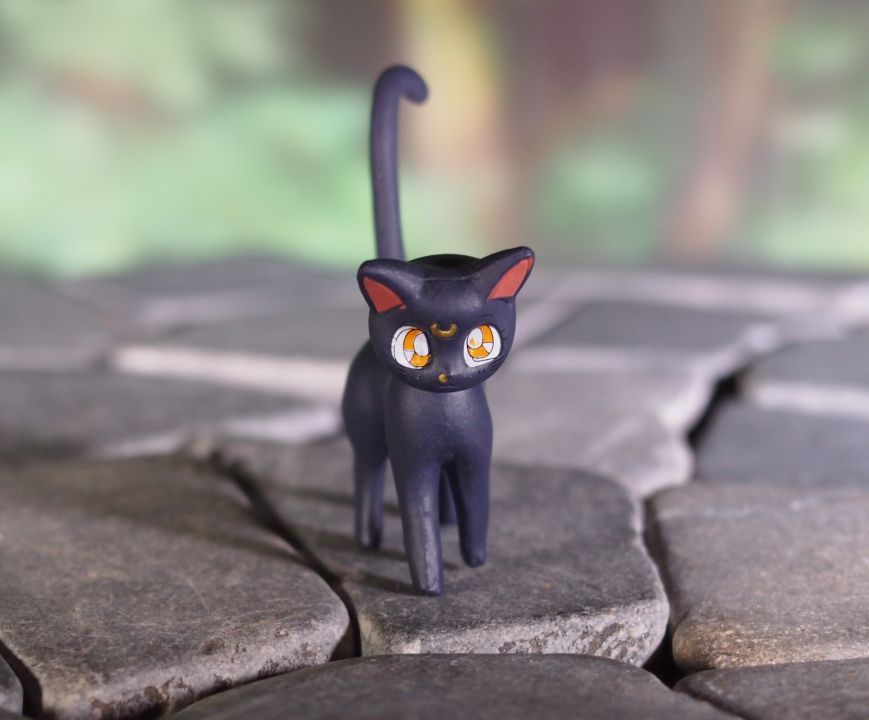 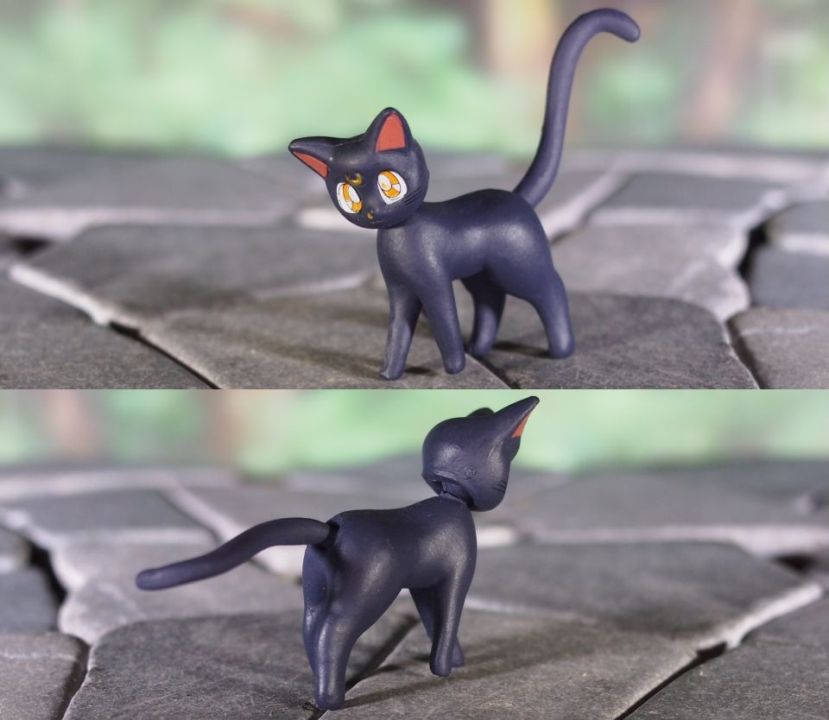 The magic cat from the Moon doesn’t feature much articulation, but it’s her wits and courage that counts, so a ball-jointed head and a swiveling tail are just enough for some serious action. 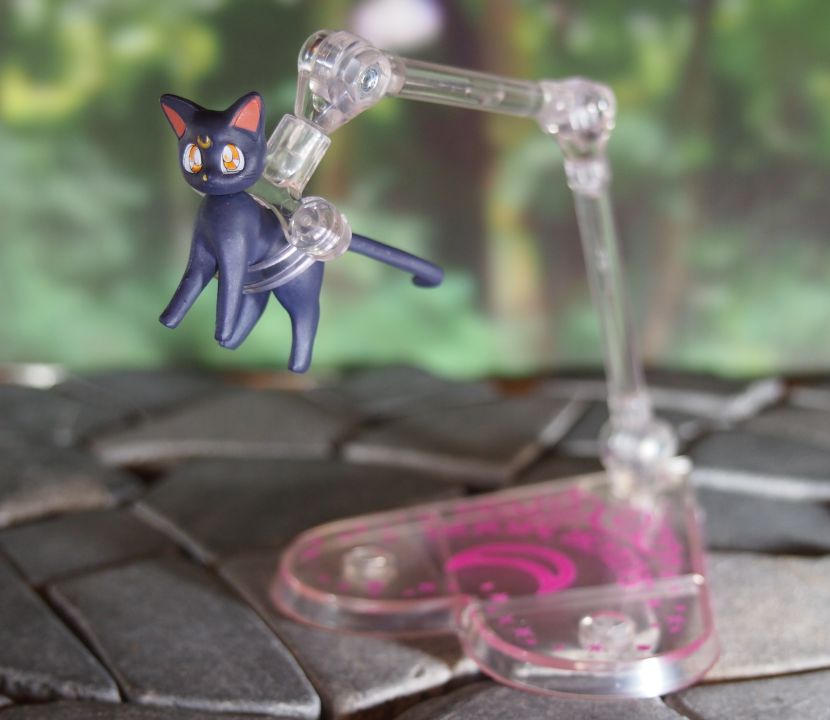 Luna comes equipped with an SHF stand, which is a really neat means of assistance for any mid-air poses. Let me add that while I nagged about the Play Arts Kai stand accompanying Catwoman, this thing is just great. It has three tight and strong hinges, more swivel points that I can be bothered to count, a base large enough to provide perfect stability and a grip firmly grabbing the figure, with everything slickly translucent and slim. If I were to find a downside here it would be the sheer technical design of how the figure is held – I’d prefer a less visible solution. 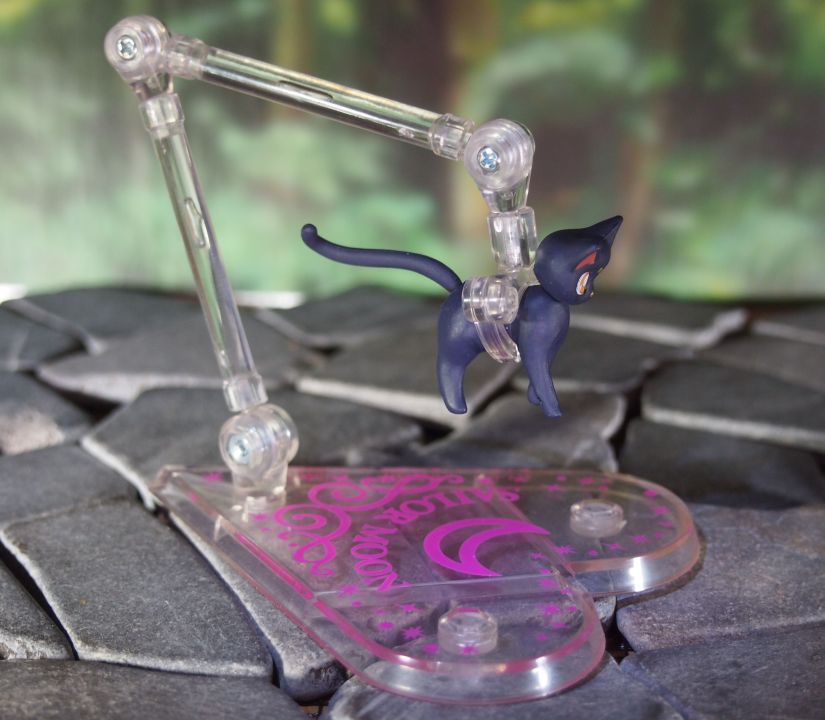 The stand is obviously dedicated for this particular set, featuring not only a number of decorative markings but also a heart-shaped base. It’s not like Luna needs anything else but mainly for decorative purposes she comes with yet another accessory: Usagi Tsukino, known as Sailor Moon. 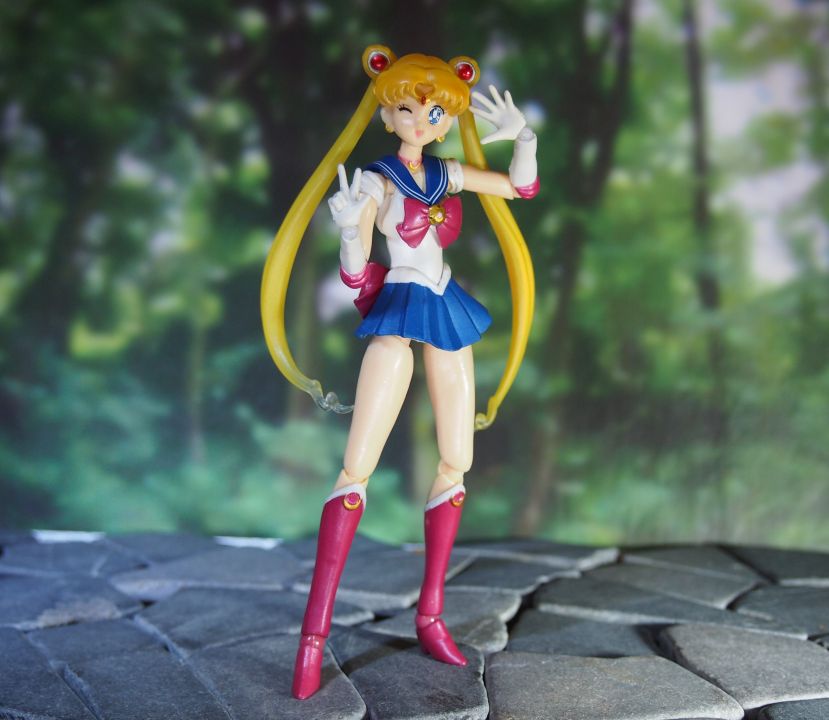 You probably immediately noticed a slight… thing about Sailor Moon that is both an issue and an advantage. I mean the visible hip joint. Like all SHF figures she also has this ability to have her legs kind of pulled out a bit in order to expand the range of motion and believe me – it pays off big time. She is super posable, high-kicking without a problem, but the price is difficulty in covering the joint up with this ultra-short skirt of hers. I can’t really make my mind if I prefer her like that or would be willing to give up some posablity for a more consistent and elegant image. I guess it depends on the intended use: she is great as an action figure but requires a bit more fiddling while taking photos or preparing display. It’s not a really big thing, just be sure to pay extra attention to pushing her hips all the way up if you’re not using her for more dynamic shots. Or view her slightly from above to have the skirt cover the problem. Hmm, that sounded wrong for some reason…

Sigh, let’s dwell even deeper into the uncomfortable subject by showing Sailor Moon’s action pose and panties… I mean the hip joint area!! 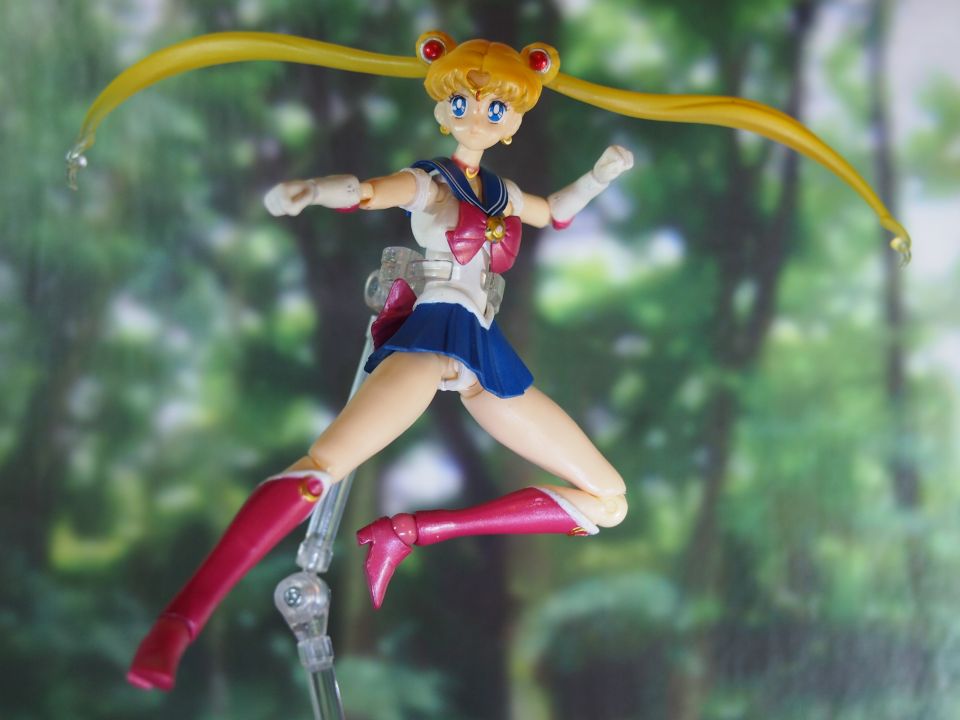 So that’s how it looks from beneath. I’d advise avoiding that kind of angle if possible…. Moving on. As you can see her pigtails can be moved sideways thanks to swivel joints in the buns. The mobile pieces are partially translucent which pretty effectively translates the idea of wisps of hair. Also, the stand works just fine, as long as you’re willing to look past the grip around her waist. 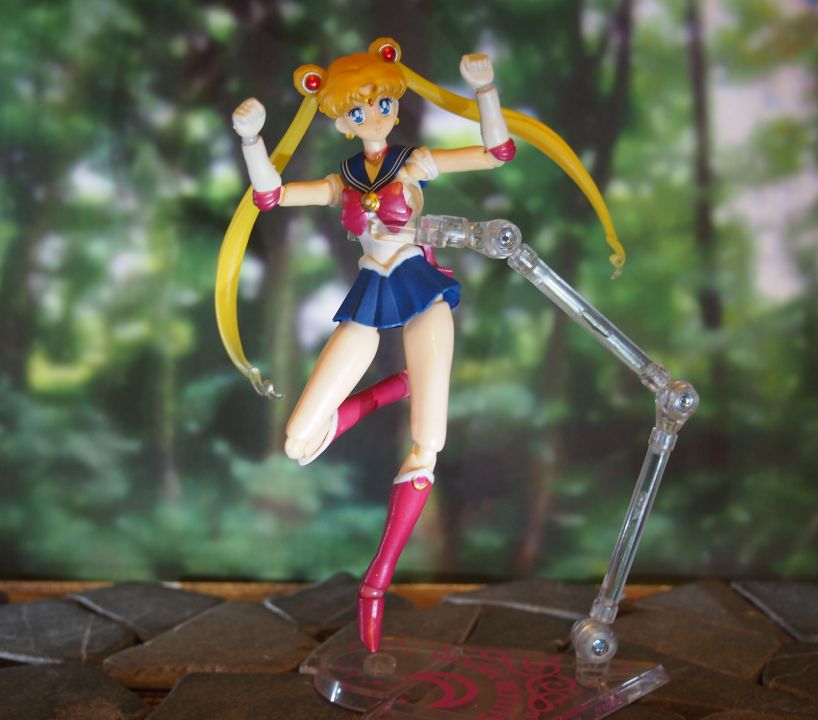 All the stand arm’s joints won’t budge a bit unless intentionally repositioned and let me tell you that she’s been standing in a similar pose on my shelf for few days now. This is especially helpful considering lower stability (compared to other SHF figures I have) due to thin legs and tiny high-heeled feet. 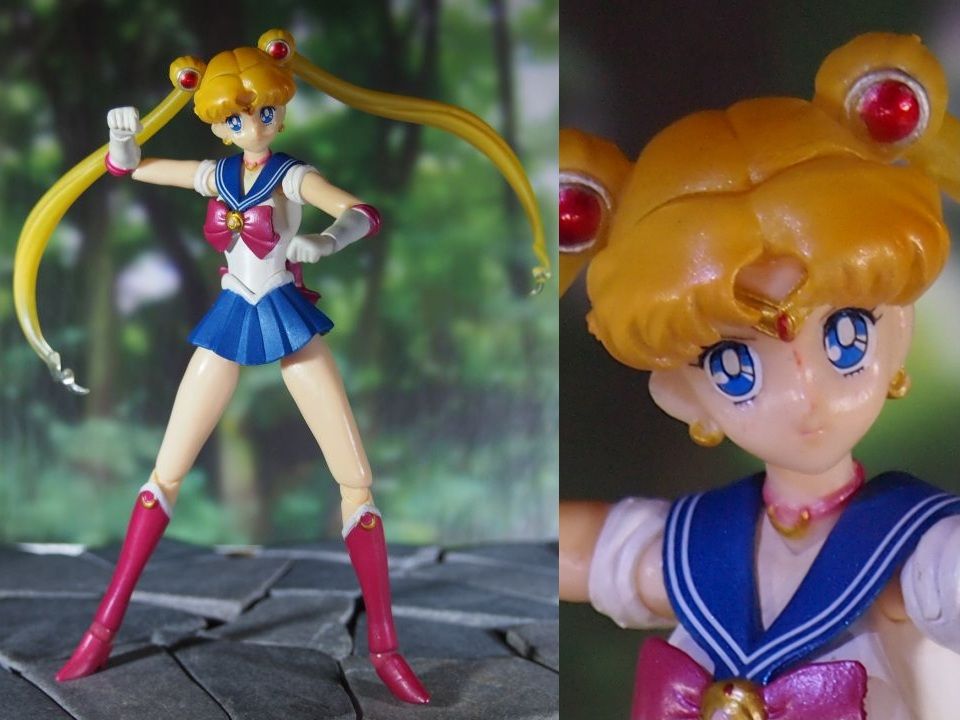 As usual, there is a number of extra hands for different gestures and this is also connected with a bit of a problem. Some of those fit very loosely in the wrist sockets and are easy to get accidentally detached while playing with the figure. Luckily others fit securely, so the issue is obviously on the palms side and the solution can be adding a layer of nail polish or super glue or other substance that would slightly thicken the pegs where needed. The imperfection of quality control can be also seen on one of the faces with nasty paint bleeding. Unless it’s a hardcore Super Tough Bring It On Sailor Moon version with actual bloody face intended… 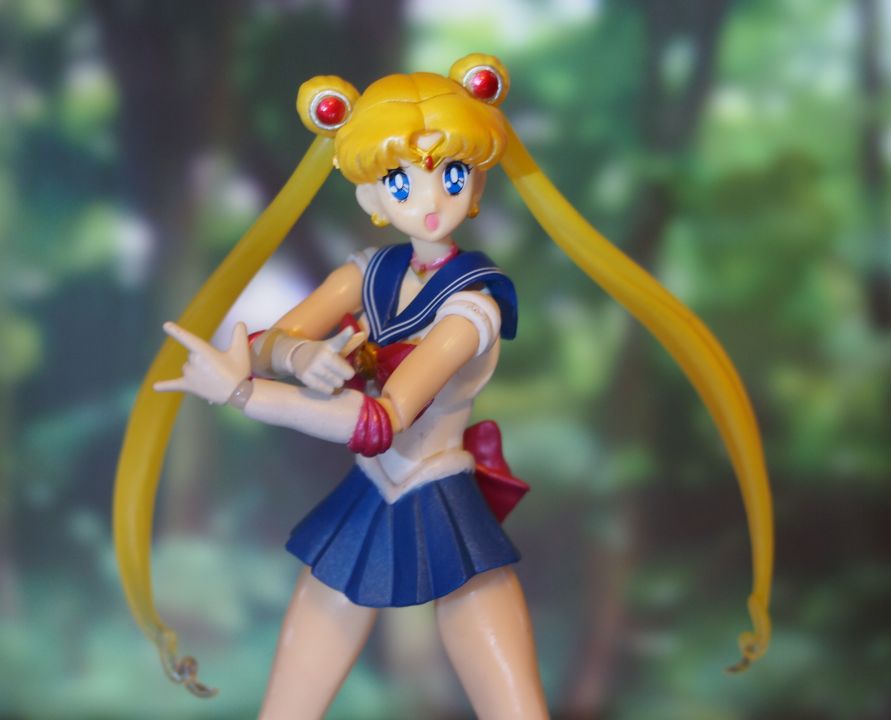 There is of course a pair of palms allowing for the signature punishing in the name of the Moon pose. And where there are interchangeable palms, there must also be… 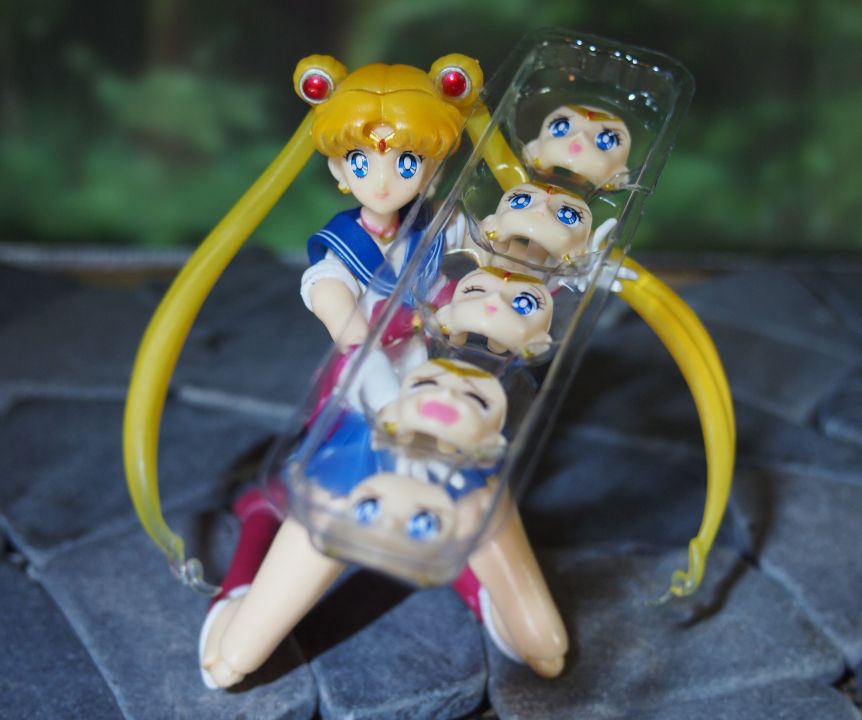 …a set of faces! One of them lacks the diadem and the reason for that is the initial weapon that Sailor Moon used in the first series of the show: 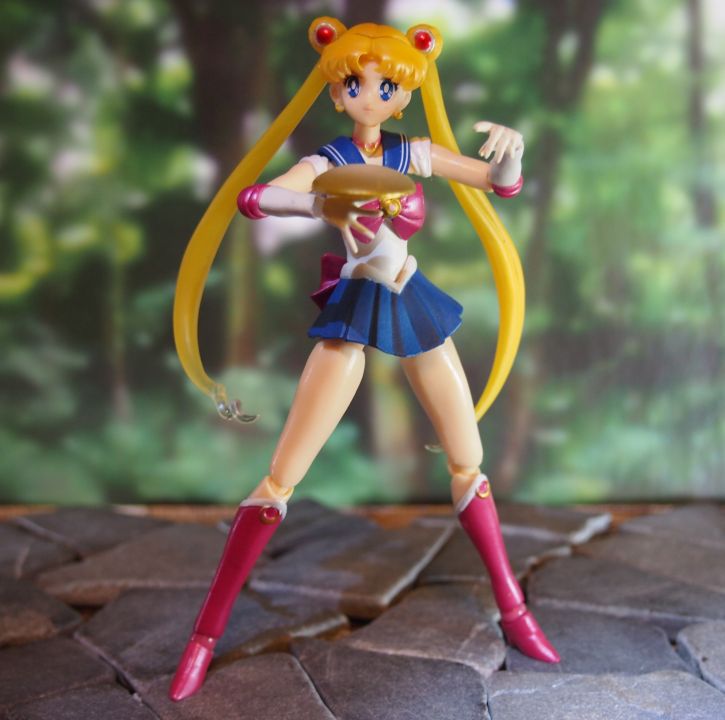 The Moon Diadem that became a kind of energy-filled demon-killing throwing disc. The accessory here is yet another palm with the disc attached to it. And speaking of weapons… 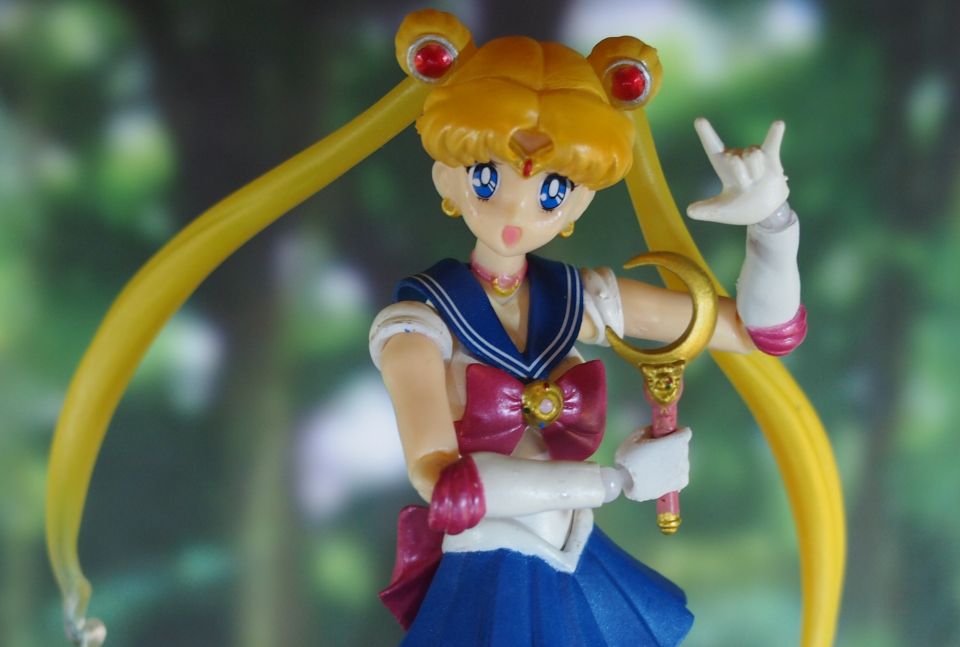 Sailor Moon has her sicklish wand, handy both for slicing pizza and demons’ throats. In the show it was at one point upgraded, giving Usagi transforming ability and more powers. 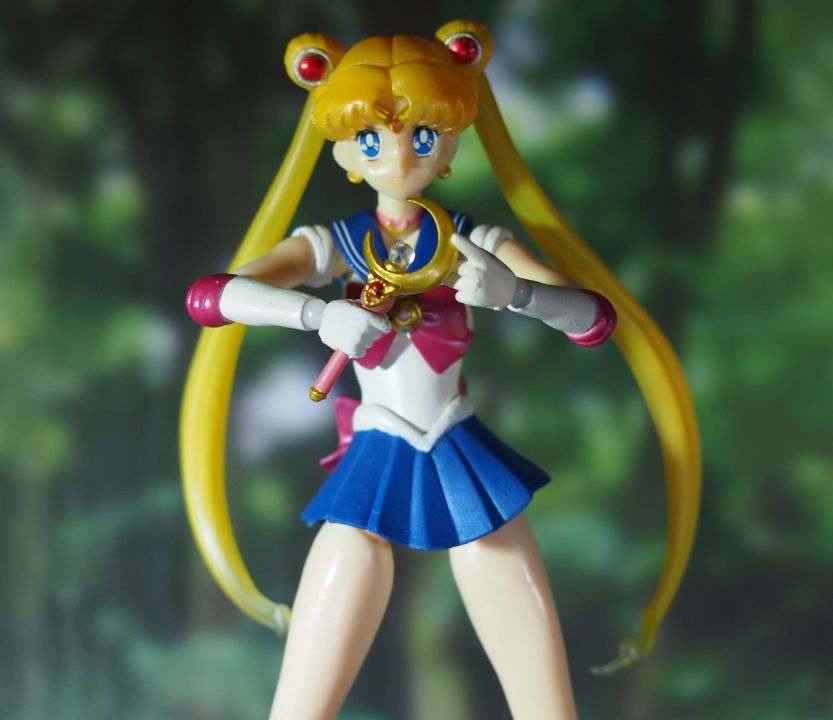 And the crystal-bearing version was also added here. I love how the crystal actually is translucent and shaped with tiny facets. Nice job!

It’s time for a size comparison with another SHF figure and a Revoltech one and I’ll use this as an excuse to introduce some plot-driven fun. It’s worth noting that Sailor Moon is strangely tall compared to Trunks – and she is supposed to be in her early teens, while he is 19! They definitely are in scale, but I think the key factor here is each show’s animation style: all female characters from Sailor Moon have these looong legs, while DBZ guys are rather squabby and thickset. 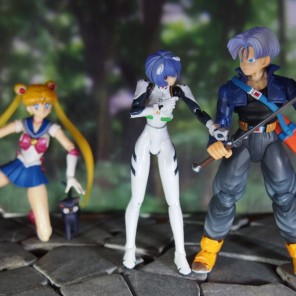 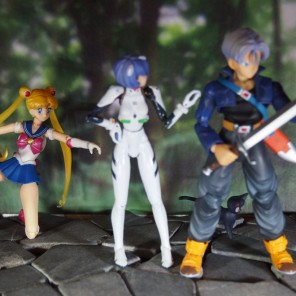 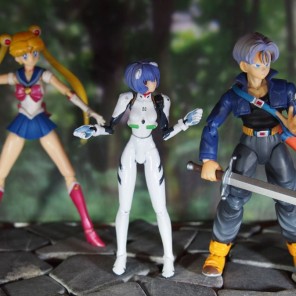 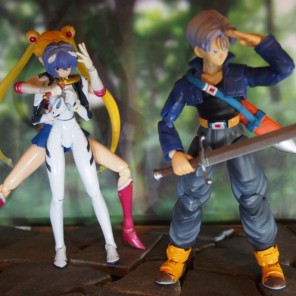 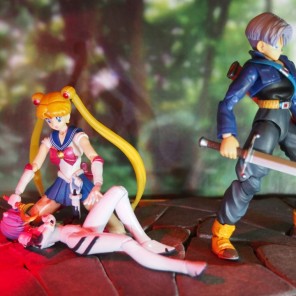 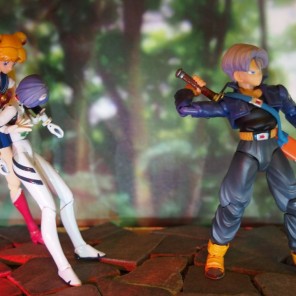 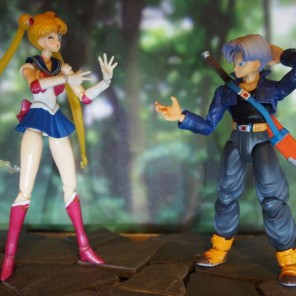 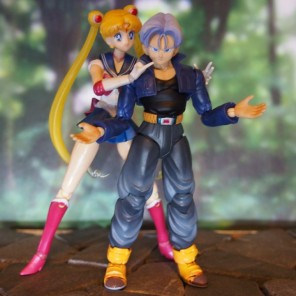 Oh, that Usagi! Always up to something. Like up to her elbows in a potential rival’s blood. Never stand between a blond blue-eyed Japanese teenager and her crush of this week! 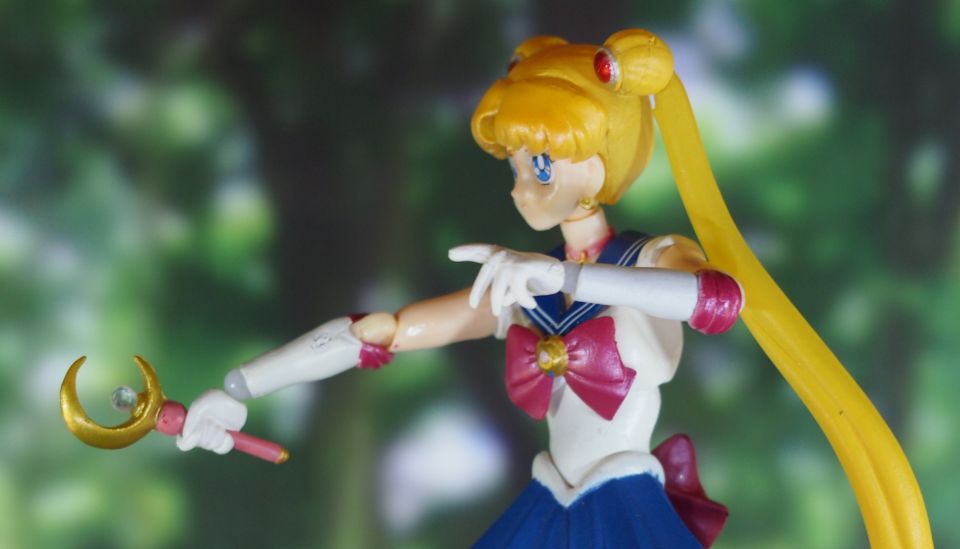 As you can see I had my share of fun while preparing this review and this says a lot about the figure. I always liked the humorous aspect of Sailor Moon best, but I could appreciate also the great music and few well animated and emotionally presented action moments (especially around each season’s finale). The S.H.Figuarts version of Usagi Tsukino follows that trend perfectly. She can be fun – with her wacky expressions and hands forming goofy gestures. And she can be cool – with her superb articulation and iconic accessories. The stand is also both awfully kawaii and very handy when jump attacks or flying kicks are involved. To put it briefly, this figure is very sailor-moonish and that also sums up her potential. Sure, I can stretch my imagination to the point of seeing a Japanese culture’s fan buying her to get a token anime character – a girl in the school uniform or an action figure collector wanting her purely as an anonymous female ass-kicker, but… not really. With so many various manga figures and statues out there this is obviously a choice for fans of the character. A really good one, the best as of now if one wants to have his Sailor Moon agile and combat-ready, but still very theme-oriented. 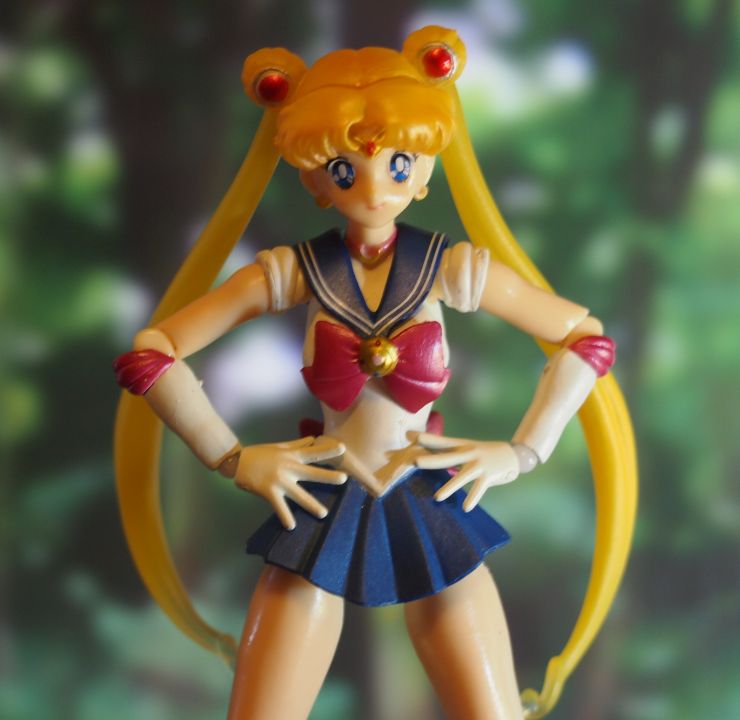 + ultimate action-oriented representation of the character

+ a sufficient set of interchangeable palms and faces

+ iconic accessories including weapons and Luna

– some palms fit very loosely in the wrists

– Luna could use a bit more articulation

fans of Sailor Moon, especially those who want an agile action figure and/or a highly posable display piece; those few pervs who want a toy representation of an adult-looking teenage girl in a short-skirted Japanese school uniform

non-fans of Sailor Moon, as she is rather narrowly oriented compared to a selection of more generic looking manga female action figures out there 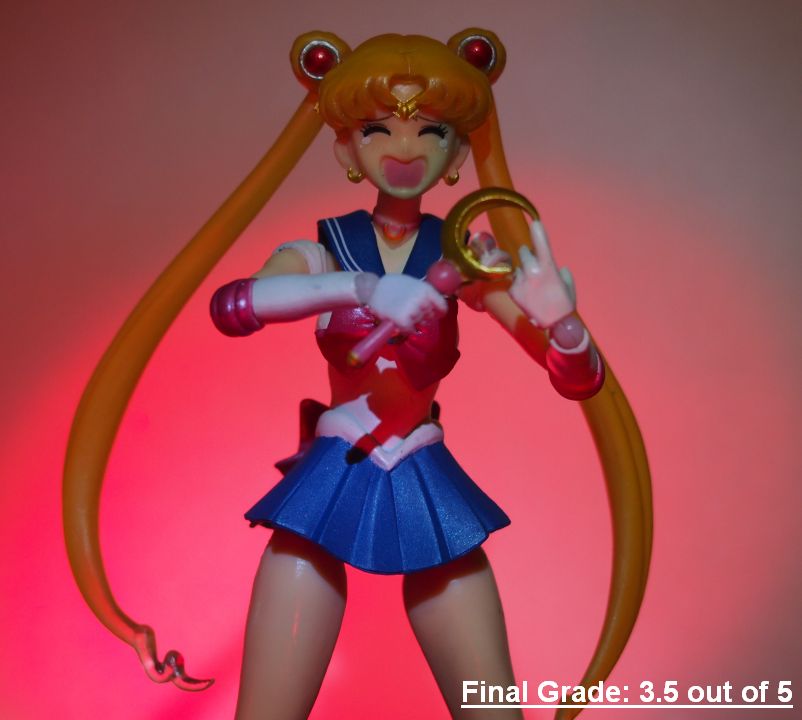 [EDIT: It has come to my attention that this figure is probably a bootleg. I can’t tell this for sure since the quality of this one is really good, but there are hints like the facial paint bleed which shouldn’t take place and the shoulder joints being skin-tone-colored inside instead of white (to match the sleeves). The loose palms on the other hand are a problem reported also by original (guaranteed original) figures owners, so there you go. I of course encourage you to buy the genuine thing – if you are able to find it and recognize it…]